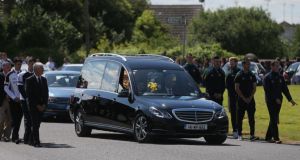 The coffin of mother-of-two Lorna Carty, a victim of the Tunisia terror attack is carried in a hearse, escorted by players from Meath GAA and Dunderry GAA. Photograph: PA 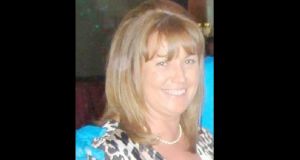 A huge crowd of about 2,000 mourners were at the Church of the Assumption in Robinstown for the funeral of Lorna Carty 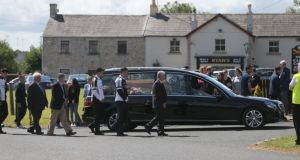 The coffin of mother-of-two Lorna Carty, a victim of the Tunisia terror attack is carried in a hearse, escorted by players from Meath GAA and Dunderry GAA, from the Church of the Assumption Robinstown, Co Meath. Photograph: PA 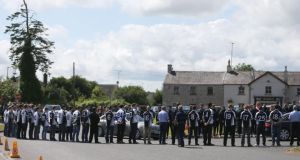 Players from Meath GAA and Dunderry GAA line the road as they wait to escort the hearse carrying the coffin of mother-of-two Lorna Carty, a victim of the Tunisia terror attack. Photograph: PA

The goodness and kindness of Lorna Carty will always be remembered, her funeral Mass in Co Meath heard on Saturday.

Ms Carty was one of three Irish people killed in a gun attack on a beach in Tunisia on Friday, June 26th.

A huge crowd of about 2,000 mourners were at the Church of the Assumption in Robinstown to support Ms Carty’s husband Declan, son Simon and daughter Hazel. She is also survived by her parents Johnny and Amy, sister Ruth, and brothers Jim, Ronan and Brian.

As the capacity of the church is about 350, additional seating was placed outside.

Members of the local community were among mourners from about 10.30am providing tea, coffee and cold drinks as they waited for Ms Carty’s remains to arrive for the funeral Mass.

The hearse made the short journey from Ms Carty’s home, arriving at approximately 11.45am and the coffin was brought into the church accompanied by the hymn Abide With Me.

Guards of honour were provided by the Meath senior Gaelic football team, the Dunderry intermediate GAA team and the Dunderry camogie team.

Fr Horneck was joined on the altar by Fr Terry Toner, parish priest of Kilmessan, Ms Carty’s home parish, Fr Paddy smith, a relation of the deceased woman, and by Fr David Brennan.

Bishop Michael Smith, who visited the Carty family yesterday, was represented by Msgr Seán Heaney, Vicar General of the Diocese.

Msgr Heaney spoke briefly to convey Bishop Smith’s regret that he was unable to attend due to a prior engagement that he could not cancel.

He conveyed his sympathies to MsCarty’s family on the “unbelievable and appalling circumstances” of her death and said Bishop Smith had been impressed by the sense of solidarity shown to the family.

“We have lost a great person in Lorna. A person of goodness,” he said.

In his homily, Fr Horneck told Ms Carty’s family: “We are all so sorry. We feel along with you today. We too mourn the loss of Lorna. Friends, neighbours, colleagues, and the local GAA club here in Dunderry to which she was so committed so often giving her nursing aid to players when injured – she was a club nurse – that’s probably the best way of describing Lorna’s involvement.

“Her goodness and kindness will always be remembered and appreciated and spoken of. But our mourning as friends, neighbours, colleagues, club and parish is nothing compared to your loss.”

“And you Ruth, Jim, Brian and Ronan – you have lost a loving sister.”

Fr Horneck said he had “no words of human comfort” to ease their loss.

Various items representing Ms Carty’s life were brought to the altar during the offertory, including her nurse’s first aid bag, a reminder of the physical and emotional comfort she had provided to people during her life.

There was also a Dunderry GAA jersey and a shoe, representing the fact that she loved style, and a reminder to all of the colour she brought to people’s lives, mourners heard.

Ms Carty’s godchild Emily Harlin, nephew Tommy Harlin and niece Clara Harlin were among those who brought the gifts to the altar in her honour

Prayers of the faithful were offered for the other people killed in Tunisia.

Thousands queued at the end of the Mass to offer their condolences to the family. Fr Horneck asked that people not linger long as it had been a difficult few days for them.

Ms Carty will be buried on Saturday afternoon at nearby Retaine Cemetery.

The Meath woman had been on holidays with her husband Declan, a dairy farmer, when she was killed. They had received the Tunisian holiday as a gift from a relative, as Mr Carty was recovering from heart surgery.

Their daughter Hazel (18) had just completed her Leaving Cert and learned of her mother’s death while on holiday in Turkey. Their son Simon (21), a science student at UCD, was at home in Robinstown.

Ms Carty was one of three Irish people killed by Tunisian student Seifeddine Rezgui, who opened fire on a beach in the Sousse region on Friday June 26th killing 38 people.

Larry and Martina Hayes, a couple in their 50s from Athlone, were hours from returning home from their annual holiday when they were gunned down.

Their funerals took place on Friday.

1 Bus Éireann to shut many inter-city routes due to financial pressures
2 Coronavirus cases rise in most counties but rate of increase is slowing
3 Donald Trump's taxes: US president paid $750 federal income tax the year he won the election
4 More than 30 people queue overnight to secure property in Carlow
5 Hello Eir, is anybody there? Four unhappy customers complain
Real news has value SUBSCRIBE