Thousands of firefighters to get 1916 commemorative medals 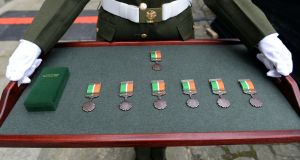 The 1916 centenary commemorative medals which were presented to members of the Defence Forces by President Michael D Higgins, in December 2017. Photograph: Eric Luke / The Irish Times

Some 3,500 firefighters are to be presented with medals to mark their contribution to the 1916 commemorations two years ago.

Medals marking the centenary were presented to members of the Defence Forces by President Michael D Higgins in December 2016, in line with a commitment in the Programme for Government.

In a notice on the eTenders website, the Department of Housing, Planning and Local Government seeks tenders for the manufacture, supply and delivery of about 3,500 1916-2016 commemorative medals for presentation to members of the State’s fire services.

Each medal set should consist of “a brass medal with matt antique silver finish, a holder, ribbon with locking pin, ribbon drapes with locking pins and presentation box”.

On completion, the medal packs are to be delivered to 27 local authority locations throughout the State.

A spokesman for the department said the issuing of 1916-2016 commemorative medals was a commitment in the Programme for Partnership Government for the Defence Forces, and therefore did not include staff in local authority fire services.

“However, the Department of Housing, Planning and Local Government is commissioning medals in recognition of the role played by staff working in the fire services in relation to the 1916 commemorations,” he added.

“It is envisaged that all fire services staff serving in April 2016 will be eligible to receive the medal. A tender process is being undertaken as part of procurement.”

The President presented the 1916 centenary commemorative medals to serving members of the Defence Forces at Dublin Castle on December 4th 2016.

The Government said at the time it was “a special acknowledgment from the Government to the members of Óglaigh na hÉireann, both permanent and reserve, who have served during this centenary year of 2016”.

“It highlights the Government’s appreciation of the excellent work undertaken by the members of Óglaigh na hÉireann, both at home and overseas, and the commitment to excellence which is a hallmark of our Defence Forces.”