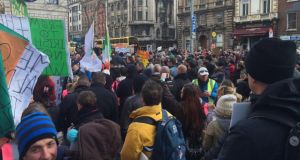 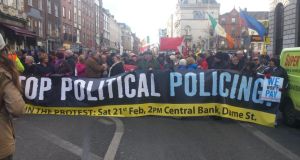 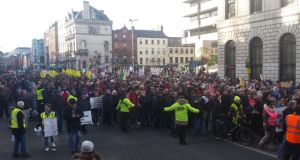 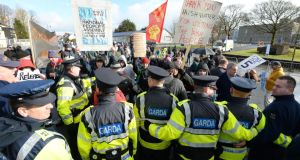 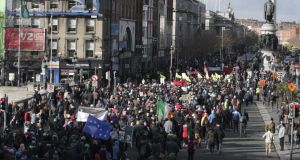 Protests have taken place in Dublin and Castlebar against the jailing of five anti-water charge protesters.

A protest of about seven thousand people, led by the families of jailed anti-water charge protesters, marched through the centre of Dublin to a rally at Mountjoy Jail.

In Castlebar, about 170 protesters demonstrated outside the constituency offices of Taoiseach Enda Kenny on Tucker Street, before gathering outside the TF Royal Hotel where the Fine Gael national conference is taking place.

About 300 members of the groups Right2Water National Reform Movement, People Before Profit and Forgotten Farmers were met by barricades and a large contingent of gardaí.

At a rally independent councillor Declan Bree said the message to the Government was that reduced charges were not sufficient. Noting less than complete abolition of the charges was necessary, he said.

In Dublin a number of organisations including the Anti Austerity Alliance, the Socialist Workers Party, trade union Unite and Eirigi addressed the workers at the central bank in advance of the march, each expressing support for their jailed co-protesters.

Jason Lester (16) who was arrested last week in connection with the November Protest in Jobstown, Tallaght said gardaí had accused him of being the campaign ringleader.

“A guard said he would put it to me that I was the ringleader because I had a loudspeaker,” he told the crowd which reacted with hoots of derision for An Garda.

Another woman who along with her husband was arrested in connection with the Jobstown protest said she had been told the arrest was for violent disorder and for detaining Tánaiste Joan Burton.

She said Jobstown had been their home for 20 years and she would not be deterred from joining a protest there. “If she thinks she is going to stop us she is wrong” she said of Ms Burton.

By the time the march got underway at about 2.20pm number had swelled from an initial estimate of about 1,000 to several thousand.

The march took 40 minutes to pass through Westmoreland Street en route to Mountjoy, where they joined by a further contingent of marchers coming from the Phibsboro direction.

Estimates of the crowd at that point varied with marchers claiming in excess of 7,000 people.

Earlier, the Right2Water campaign urged all those at the march to remain calm and peaceful, in the wake of Thursday’s jailing of five protesters for contempt of court.

The five had defied a court order to come within a 20-metre exclusion zone set up around water installation.

Ms Hughes, Mr Batty and Mr Byrne were today each sentenced to 28 days in prison.

Mr O’Neill and Mr Moore were sentenced to 56 days in prison.