Thousands expected at 1916 events in Cork on Monday

Stand-off between Irish Volunteers and British forces to be commemorated 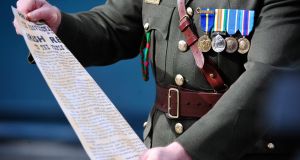 A member of the Irish Defence Force reads the 1916 proclamation, outside the GPO during a military march in Dublin. Photograph: Aidan Crawley/EPA

Thousands are expected to attend a commemoration in Cork on Easter Monday to mark the centenary of the 1916 Easter Rising which saw a 1,000 Irish Volunteers mobilised in the city and an engagement between the Kent family and the RIC at their home in Castlelyons in Co Cork.

The main ceremony in Cork will take place at the National Monument on the Grand Parade when, as part of a synchronised nation ceremony, wreaths will be laid at 1.15pm to mark the exact time that the first shots were fired in Dublin on Easter Monday and the start of the rebellion.

The Cork ceremony will also commemorate events in the city 100 years ago when a force of 1,000 Irish Volunteers under Brigade Commandant, Tomas Mac Curtain and his comrade, Terence Mac Swiney were mobilised in anticipation of a rebellion.

Mac Curtain, who was later murdered by members of the RIC in 1920, had organised volunteers to march to Co Kerry to collect guns from the German ship, the Aud which was to land the weapons at Fenit. Some 400 men marched to Kilmurry outside Macroom on the first leg of the journey.

However Mac Curtain decided on Easter Sunday evening to send his men home after receiving mixed messages that the rebellion had been cancelled.

When the word came through on Monday evening that the rising had started in Dublin, Mac Curtain again summoned his men to arms.

Cork Volunteers occupied the Volunteer Hall on Sheares Street near the city centre and a major stand-off developed with the British forces in the city which lasted a week before a peace deal was brokered by the lord mayor of Cork, Thomas Butterfield and Bishop of Cork, Daniel Coholan.

The deal involved the Irish Volunteers agreeing to hand over their guns on the understanding they would be returned at a later date in return for being allowed to return home but Mac Curtain was arrested and detained in Frongoch Camp in Wales along with those who fought in Dublin.

The stand-off at the Volunteer Hall, now St Francis’s Hall, will be remembered in Cork on Easter Monday when representatives of local historical groups in the county will gather at Cork County Hall for a reception and unveiling of a commemorative plaque before marching to Sheares Street.

The group, expected to be around 250 strong, will be led by a Defences Forces Colour Party and the Thomas Kent Pipe Band, named in honour of the 1916 hero from Bawnard in Castlelyons who was executed on May 9th 1916 after he and his brothers engaged the RIC in a firefight at their home.

The Defences Forces Army Band will perform at Sheares Street in front of dignitaries including the Lord Mayor of Cork, Cllr Chris O’Leary and Mayor of County Cork, Cllr John Paul O’Shea before the group march to the National Monument on the Grand Parade for the wreath laying ceremony.