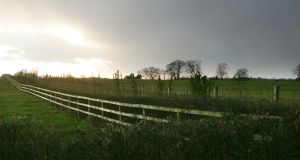 The Thornton Hall prison site in north Dublin is worth €48 million less than its current valuation in Prison Service accounts, the report of the Comptroller and Auditor General has said.

The site, in north Co Dublin close to the M50, was purchased in 2005 by the Prison Service for €29.9 million and was intended as the site of a jail to replace Mountjoy Prison.

With ancillary costs, including access road and services development, site preparation and surveys, and legal fees, the total cost of the project to May 2015 was €50.6 million, the report said. The report also noted that in accounts for 2014, all lands used by the Prison Service, but owned by the Department of Justice, were valued at existing use value or market value, with the exception of the Thornton site. It continued to be valued at €50.6 million.

It said Thornton was being dealt with differently in the accounts and was “overvalued”. The decision to purchase the land was underpinned by inadequate cost analysis, it added.

A Valuation Office report in February 2015 put a valuation of €2.4 million on the site. “Should an alternative use be identified, then some of the costs invested to date may be reusable by the State,” it said.

There has been no building work on the site to date, and it is currently being used as a prison horticultural project.

Thornton Hall jail was intended to replace Mountjoy Prison and was approved by Government in 2004. In 2006, it was decided the site would also be used for the relocation of the Central Mental Hospital and for a new women’s prison.

In 2011, a review group recommended scaling back the project, with the development of 300 cells and 20 step-down facilities.

Because of the delays with Thornton, €28.7 million was invested in Mountjoy. The funds eliminated “slopping out” in cells, and reduced overcrowding by developing 92 additional cells. Security was also improved.

A new wing was built at the Midlands Prison in 2012, with 175 cells at a cost of €25 million, which has helped reduce pressure on Mountjoy.

The report said Thornton Hall was purchased to deal with problems at Mountjoy, especially overcrowding. The Government was advised the initial construction costs would be €150 million, increasing to €525 million for the most ambitious project envisaged.

“Since 2010, many of the problems at Mountjoy have been dealt with at a much lower cost than that proposed originally to build a new prison on the Thornton site,” the report said.

It said the decision to purchase Thornton “was underpinned by inadequate analysis of the likely costs of developing a new prison”, which had been “significantly understated”. The costs of addressing the problems at Mountjoy “appear to have been overstated”, it added.