The Question: Why is the ECB getting rid of the €500 note? 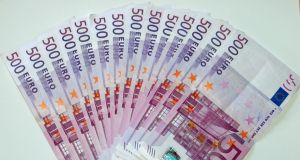 Farewell, €500 note, we hardly knew ya. According to reports coming out of the European Central Bank this week, Mario Draghi and co have decided that the days of the big purple banknote are numbered. Apparently, it is far too convenient for criminals and terrorist groups, with a €1 million bundle of notes coming in at about 2kg(4.4lbs). There’s a reason it became known in some circles as a “Bin Laden”.

Of course, the €500 note is an absurdly large denomination. It was only introduced at the insistence of the Germans, who are notoriously fond of cash and suspicious of debt. The Irish Central Bank, on the other hand, never printed them.

Just as rumours of the €500 note’s demise were emanating from Frankfurt, former US treasury secretary Larry Summers was taking to the Washington Post to argue that the $100 bill should also be abolished. Citing a recent Harvard study, Summers said that a global “moratorium on printing new high-denomination notes would make the world a better place”.

But much like, say, the surveillance debate, claims that we must stop “X” because terrorists use “X” can blur some of the larger implications of the discussion, particularly in terms of the importance of cash to freedom and privacy.

In a world of negative interest rates and low inflation (or even deflation), holding large quantities of cash is not that radical or irresponsible. But it can lead to a concerted effort from central banks to dissuade people from using cash as a hoarding mechanism. Just last month, Norway’s biggest bank called for the end of cash in the country, again citing concern over criminal activity.

A war on cash might be cast as a byproduct of the war on terrorism or the war on drugs, but we should think deeply about the power that would accrue to banks and governments in a cashless society.