The Question: Should we worry about misleading statistics?

The Big Mac Index can spot when books are being cooked. What might it see in Ireland’s revised GDP figure? 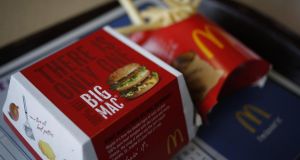 “Lies, flame-grilled lies and statistics” ran the headline on a short piece in the Economist in January 2011. The article was about a quirk revealed by the Big Mac Index, the magazine’s whimsical-sounding measurement.

Although far from comprehensive, the simple purchasing-power analysis compares the cost of Big Macs across the world. Few branded foods are as ubiquitous as the Big Mac, making it a decent yardstick for such a measurement.

The article confirmed that something seemed to be up with Argentina’s official inflation rate of about 10 per cent: the rise in Big Mac prices over the previous 10 years was in a different league.

“Burgernomics does support claims that Argentina’s government is cooking the books,” the magazine wrote. “The gap between its average annual rate of burger inflation (19%) and its official rate (10%) is far bigger than in any other country.”

That might have been the end of it except that, over the following year or so, the price of Big Macs in hundreds of Argentinian McDonald’s fell to about two-thirds of the price of similar burgers on the menu, and promotion of the signature burger ceased almost entirely.

The suspicion was that the then government leaned on McDonald’s to freeze or lower the price of its Big Mac, presumably in a bid to mislead the Economist and beat the index. The incident led to national embarrassment. These are the sort of odd outcomes that can arise when your official statistics lose credibility.

And so we come to the extraordinary case of the State’s sharp upwards revision of 2015 GDP, to a whopping 26 per cent from 7.8 per cent. Unlike the Argentinian government of 2011, the Central Statistics Office is highly respectable and fastidious, and nobody is suggesting there was anything illegitimate about the technical reasons for the updated figures, but they are certainly misleading: the economy is simply not growing at that rate.

With such eye-catching statistical revisionism comes a risk that the numbers lose credibility, and the value of any statistic lies in the trust we can have in it. Just ask McDonald’s diners in Argentina how that works out in the end.