The Question: Should we replace Mr, Mrs and Ms with the gender-neutral Mx? 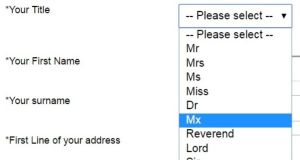 What’s in a title? Oxford City Council raised the question this week after proposing the possibility of dropping titles such as Mr and Ms because “they are not inclusive of transgender people”.

The council is also proposing to add the gender-neutral title Mx – pronounced “mix” – until titles are phased out.

In suggesting this change Oxford is following an example set by Brighton and Hove in 2013, and indeed by Oxford Dictionaries, which added Mx last year.

Certain elements of the UK media have been predictably aghast.

The London Times sarcastically described gendered titles as “one of the cruellest weapons of the oppressive power hierarchy, a tool used by the binary forces of traditional gender stereotypes to crush the spirit of the transgender community”.

And the former Tory minister Ann Widdecombe – never shy to offer an opinion – was typically scathing.

“Haven’t Oxford City Council got anything else to worry about? It’s a waste of time and money and achieves nothing,” she told the Daily Mail.

“The English language evolves and develops all the time, but this is just nonsense.”

She’s right about the English language changing all the time. In Old English, nouns were gendered, just as in French, German and numerous other languages; the practice fell out of use between the 11th and 13th centuries.

It’s important to consider this debate in the context of the inexorable rise of Ms in place of Miss and Mrs, titles quaintly burdened by the designation of marital status.

Nobody sensible is bemoaning their gradual obsolescence. One can be sceptical about whether Mx will catch on, but we shouldn’t pretend it serves no linguistic or social purpose.

Our words must suit our needs, and the greater recognition of the transgender community is just one example of the way our needs adjust.

It’s silly to think that our words and language can’t, won’t or shouldn’t adapt as well.