The Proclamation was a speech by Pearse, not a constitution

Captain Peter Kelleher from the 27th Infantry Battalion reading the Proclamation at the GPO as part of the 1916 Rising celebrations. Video: RTE 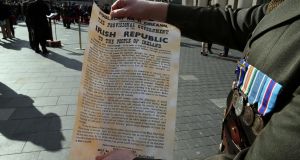 An Irish soldier holds a copy of the 1916 Proclamation outside the GPO in Dublin. File photograph: Paul Faith/AFP/Getty Images

The 1916 Proclamation is neither a sacred text nor a democratic constitution in embryo, but a hastily-improvised and fragmentary speech.

Largely written by Patrick Pearse, a powerful rhetorician but not a political theorist, it was not the product of sustained deliberation and debate amongst the seven signatories and did not encapsulate or reconcile their varying conceptions of what a sovereign independent Ireland would be, or of how it would function.

Nor did it acknowledge the reality that Ireland already was – by the standards of the day – a discontented part of a modern democratic state, the United Kingdom: indeed, a conjunction of British and Irish democratic forces in the constitutional battle over the “People’s budget” of 1909 had brought about the ending of the House of Lords’ veto on legislation, and so eventually secured the passage of home rule into law in September 1914.

Its use of the term “suffrages” could be construed as proposing separate electorates for women and for men.

Apart from the unaccented “Poblacht na hEireann” there is not a single reference to the necessity for the primacy of the Irish language in the new Ireland, something particularly dear to Pearse’s heart.

The document’s insistence on equality for all Irish people is commendable, though, as with the term “provisional”, this echoes not only earlier calls for rebellion but the declaration of the Ulster Provisional Government in 1913, which spoke resonantly of safeguarding “Security of Civil and Religious Liberty to all Classes and Creeds”.

It would have been a gullible northern nationalist who set much store by those fine phrases: why should a unionist or Protestant have been reassured by Pearse’s words?

The Proclamation declared that, “until our arms have brought the opportune moment for the establishment of a permanent National Government”, the Provisional Government, a self-appointed male government of seven, would hold sway.

This Augustinian “make me chaste, but not yet” postponement of electoral politics, by 1916 a recognised democratic norm, provided the theoretical basis for the continuation of republican political violence in and against what republicans maintained was an illegitimate state even after its popular democratic credentials had been ratified in election after election from 1922 onwards.

Republican splinter groups and paramilitaries still adhere to the argument that they are the legitimate inheritors of the Provisional Government’s mantle and they kill in its name – without paying great heed to the Proclamation’s injunction that those who “serve its cause” must not “dishonour it by cowardice, inhumanity or rapine”.

The Proclamation also reflects the crucial circumstances in which the Rising was planned and mounted, that is the first World War.

For Pearse’s “gallant allies in Europe” – imperial Germany, a particularly brutal colonial power – Ireland was just one instance of a number of efforts to stir up an enemy’s subject peoples.

All the major belligerents were at it in Eastern Europe, in the Middle and Near East, or in Central Asia, and all made cynical promises of postwar freedom to peoples who wished to be free of imperial control. Britain in 1916 was far more worried by German attempts to stir up Islamist and nationalist feeling in Persia and in Afghanistan than by the minor German-organised conflagration in her own Irish back yard.

Britain herself, of course, particularly through TE Lawrence, was busy manipulating Arab feeling in the Middle East against the Ottoman empire (with considerable short-term success and catastrophic long-term consequences).

Equally Germany, by dint simply of letting a sealed train cross through her territory carrying Lenin and his entourage back to the Finland Station in St Petersburg, secured Russia’s departure from the war and the triumph of Bolshevism: that event was not only “10 days which shook the world”, but one which redefined world politics for almost a century.

The 73 Sinn Féin MPs elected to Westminster fulfilled their election promise to establish an Irish parliament in Dublin, Dáil Éireann.

Three years later the Dáil approved the Constitution of the Irish Free State in 1922 as a necessary condition of the Anglo-Irish treaty, and its successor Bunreacht na hÉireann was directly approved by the people in a referendum in 1937.

One defining characteristic of both constitutions, ironically, the system of election by proportional representation with multiseat constituencies, was initially inserted due to British insistence that the rights of political and religious minorities in the new Irish Free State should be properly protected.

It is an enormous pity that London was not equally solicitous of the rights of the minority in the self-governing province of Northern Ireland after 1921.