The Northern capacity to focus on the negative can be breathtaking

Analysis: This deal has a chance if good faith, mutual respect and trust are applied 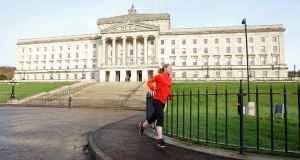 Politics, said Otto Von Bismarck, is the art of the possible, but listening to some of the initial reaction to the New Decade, New Approach deal to get Stormont functioning again you could not help wondering would some prefer the old decade and the old approach.

Still, the deal was done, and today at Stormont it’s back to business, and it was in its own way, as Mary Lou McDonald said, a “lá stairiúil” (historic day).

That resolution, after three years of different bouts of negotiation, was announced on a bitterly cold night in front of Parliament Buildings at Stormont on Thursday, where Simon Coveney and Julian Smith were clear that signing up to their 62-page document would require compromise. But with the pain there would be a lot more gain, the Tánaiste and Northern Secretary pledged.

And that does seem apparent from what is on offer .

However, in the initial responses there was quite a degree of focus on the negative. That was characterised by the opening minutes of BBC Radio Ulster’s Stephen Nolan Show .

The first question he asked his many thousands of listeners was: “Have we in Northern Ireland just heard political blackmail on the airwaves from the Secretary of State?”

That was because earlier on BBC Smith had stated that “all of the money in the financial package [in the deal] is predicated on politicians in Northern Ireland getting back into the Assembly and forming an Executive”.

This caused some outrage to the presenter who went into a riff about Smith holding cancer patients, people on waiting lists, and children in school “hostage” over his “no deal, no money” insistence.

The first politician on the programme was Sir Jeffrey Donaldson, who was happy to agree with Nolan that in terms of the vexed and sensitive issue of the Irish language, DUP leader and prospective First Minister Arlene Foster ultimately would have a veto over how the language legislation was applied and that there would be no “Irish road signs”.

Northern Ireland can be a strange place. All that focus is fair enough, up to a point, but the Northern capacity to accentuate the negative can be breathtaking at times.

After all, the North is gripped in a health crisis. There has been political sclerosis for the past three years; there are serious problems in education and public services. Every politician when canvassing on the doorsteps during the three elections of last year was told the people wanted Stormont back so that local politicians could tackle local problems.

You would have expected some concentration on the fact that here was an opportunity not only to resurrect Stormont but, with a little political generosity, the positive spirit of the Belfast Agreement, here was a deal that could work.

How to get above that negativity is the challenge, and you would expect that for most people what is on offer is quite comprehensive and positive. Certainly that was the response from business, farming and civic society. “Get on with it,” was their emphatic message.

The British-Irish agreement promises a huge injection of cash to address the health crisis, to deal with the demands of education, to improve infrastructure, to deal with a wide range of other projects – all contingent on the resumption of the Executive and Assembly.

It addresses the big issues such as the Irish language, the sustainability of a future Assembly and the petition of concern, an issue that might make most people’s eyes glaze over but is important for many politicians in the North.

And it does, as Coveney and Smith said, involve compromise. Let’s look at some of the key points of New Decade, New Approach.

Some Irish language representatives complain that the agreement does not offer a standalone Irish language Act as they demanded. But it does offer a three-stranded legislative approach addressing identity and cultural expression for Irish and Ulster Scots.

And going back into the mists of time the Administration of Justice (Language) Act (Ireland) 1737 will be repealed. That Act meant only English could be used in Northern Ireland courts.

Assembly business also will be amended so that MLAs can speak solely in Irish or Ulster Scots.

As Donaldson said, there appears to be nothing in the document that allows for Irish road signs, which will make life a bit awkward for Sinn Féin.

Still, it seems there will be an Irish language Act although not a “standalone” one, as these three Bills “will be introduced as part of an integrated package of legislation”. All rather Jesuitical, but raise a cheer for a semantic Northern Ireland solution to a Northern Ireland problem.

We are back, therefore, to good will and political bona fides.

What is absolutely key here is that three years ago the Assembly collapsed for a range of reasons but chiefly because nationalism felt disrespected, held in contempt, by the DUP.

Privately several DUP people acknowledge that point: that Foster’s crocodile remarks in relation to the Irish language, Gregory Campbell’s “curry my yogurt” comments and other actions opened up deep nationalist wounds. Therefore, for these Irish language proposals to work Foster will have to show goodwill .

If the big political beasts of the DUP and Sinn Féin can’t show good manners to each other then there is little chance of this place working. That is the inescapable lesson from recent years. There is a mutual DUP-Sinn Féin interdependency that could keep this working.

There is what appears to be a cracking good idea to have an early warning system operating in the new Executive to prevent incidents such as the row that led to McGuinness resigning three years ago. Called a “party leaders’ forum”, one of its functions will be to anticipate and deal with problems before they escalate into Assembly-threatening crises.

And on the sustainability of a restored Executive, the deal means that in the face of another breakdown the Executive will continue to function in “caretaker” form for 24 weeks before an election must be called.

There are minor changes to the petition of concern. Hitherto, with 30 signatories motions could be vetoed even if they had majority support in the Assembly, as happened with the proposal to introduce same-sex marriage in the North.

Under the agreement the parties “commit to tabling or supporting petitions of concern only in the most exceptional circumstances and as a last resort having used every other available mechanism”.

The threshold for a successful petition remains 30 signatories but a petition can only be triggered by two or more parties. This seems academic as no single party has 30 members.

Conscious of the Renewable Heat Incentive calamity – the cash-for-ash inquiry report is due soon – the deal also has a specific statement that “the parties reaffirm their commitment to greater transparency and improved governance arrangements that are aimed at securing and maintaining public confidence”.

The new Executive will implement a “shared and ambitious strategic vision for the future with the aim of improving lives across Northern Ireland”.

All that will require truckloads of money to pay for the programme for government. Smith was adamant all that largesse depended on the politicians getting back into the Assembly and Executive, which gave rise to the accusation of political blackmail.

But hardnosed Smith was holding the line. Maybe that is a form of blackmail but understandable in terms of getting Northern Ireland to work.

This incoming Northern Executive and Assembly has a chance if the essential premise at the heart of it is applied, that the parties “return to the institutions on the basis of good faith, mutual respect and trust – underpinned by strong working relationships”.