The Dutch con artist, the Hell’s Angels and the heiress

Anthonie Van Wilderoden, convicted of shoplifting in Dublin, had a colourful past 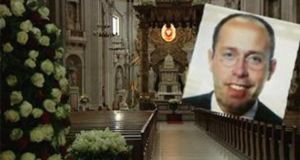 The Oudenbosch Basilica in the Netherlands, where Van Wilderoden (inset) planned a lavish society wedding to Tara Elliott, daughter of a wealthy Scottish-Irish aristocrat. Photograph via Omroep Brabant

Last week Dublin Circuit Criminal Court dealt with a shoplifting case. Nothing unusual there, bar the fact that the accused was a Dutch national who claimed to run a business that sold insects for human consumption.

However, Anthonie Van Wilderoden (sometimes spelt Wilderode) was guaranteed headlines when it emerged that he had run “a steal-to-order” scam in Dublin, using a specially adapted pram.

So equipped, the Dutchman had stolen a Nespresso coffee machine, crockery sets, even a vacuum cleaner from Arnotts, Currys and Harvey Norman after he had taken “orders” on the DoneDeal auction site.

But that is just the beginning of the story, one that involves the Hell’s Angels, claims to membership of the Spanish royal family, and his place in one of the biggest weddings ever planned in The Netherlands.

Described by his estranged wife as “a pathological liar”, the Dutchman claimed that he was born in 1972 under the name Anthonie de Bruin and had an unstable childhood. His parents, he said, split up when he was a child.

Convicted first in 1997, he was jailed later for fraud, theft, embezzlement and forgery. In 2005, he pretended to be a millionaire and conned top-range restaurants and a helicopter rental company.

Later, he came into contact with a notorious branch of a Hell’s Angels motorcycle gang called The Nomads, according to Jos Verkuijlen, a journalist with Dutch broadcaster Omroep Brabant.

The Nomads controlled much of The Netherlands’ drug trafficking and prostitution rackets. In 2004, three gang members were murdered, allegedly by a fellow member. De Bruin told the Dutch authorities he could help solve the case.

The Dutch had reason to believe him, since he claimed he had had long conversations with the main suspect while in prison and would testify. He provided a diary of the conversation to back up his claims.

Prosecutors were convinced, putting him into The Netherlands’ witness protection programme. They prepared him for trial, but it soon emerged that he had fabricated most, if not all of these conversations.

By now, he was no longer a commoner. Nor was he any longer Anthonie de Bruin. Instead, he was the Duke of Aragon, Anthonie Van Wilderode d’Aragon, set to wed Tara Elliot, the beautiful daughter of a wealthy Scottish-Irish aristocrat.

Billed as one of 2010’s top society events, “almost as big” as the wedding of King Willem Alexander eight years before , the wedding was set be held in the Oudenbosch Basilica, in a tiny village in the south of the Netherlands.

Hundreds of bouquets of flowers were ordered, along with musicians for the 250 guests. Later, the guests would adjourn to a former royal residence, the Palace Het Loo in Apeldoorn. One of The Netherlands’ most famous chefs was to cook.

The finishing touch was a ring for the bride, made from platinum and containing 108 diamonds. Shortly before the wedding, however, suppliers complained that “the Duke” had not paid his bills. Some went to the police.

Officers confronted Van Wilderoden at his final rehearsal the night before the church wedding. By then, though, he had already legally married Elliot in a Belgian civil ceremony.

Shocked, his bride and her family realised that “the Duke” was a fraudster. Furthermore, he still had nine months left to serve from a previous sentence. Van Wilderoden was put back in jail.

“He was very polite and very believable. I can understand how he fooled a noble family,” says Verkuijlen, who covered the trial.

In court last week, he was overweight and unshaven. Seeking a suspended sentence, he told Judge Cormac Quinn that he would go back to the Netherlands immediately. He said he had already bought a ticket. Instead he got two years, with the final six months suspended.

The court heard Van Wilderoden claimed to own two Irish businesses: Eddiebug which sells edible insects set up with a government business loan, and a chocolate company. His estranged wife, however, says this is not true.

Saying that she wants to make it clear that she no longer has anything to do with him, Ms Elliott said: “We are very much estranged and I will be granted a divorce very soon, within a couple of months. He is a pathological liar.

“It would be foolish to believe what he told yourself, or the courts or anyone. I’m just another one of this victims and he deserves to get a lot longer than he got,” she told The Irish Times. He still owes her father a large sum of money.

Now, however, Van Wilderoden’s life will reach celluloid, since a film about his life called Basilica is currently in production.

“It should be a great movie,” said Verkuijlen, “better than Catch Me If You Can.”