‘Wembley wouldn’t be big enough ... there will probably be just family and friends,’ Fr D’Arcy says 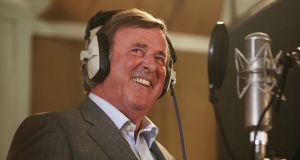 Terry Wogan’s funeral will take place next week in a private ceremony for his family, the BBC has confirmed. Photograph: Katie Collins/PA Wire

Terry Wogan’s funeral will take place next week in a private ceremony for his family, the BBC has confirmed. The Limerick-born broadcaster died on Sunday aged 77 after a short battle with cancer.

“Sir Terry Wogan’s funeral will take place next week. It will be a private service, for the family. No further details will be released, and we ask that the family’s wish for privacy is respected at this time,” the BBC said in a statement.

The statement gave no details of where the funeral would take place but Fr Brian D’Arcy, a friend of Sir Terry and his family who was with him shortly before he died, suggested it would be held in the UK.

“How can you have a public funeral for Terry Wogan? Where would you put it? Wembley wouldn’t be big enough for it, so there will probably be just family and friends at a private funeral. I suspect it will be probably early next week. It is in the UK. The BBC usually holds a quite public memorial service later on,” Fr D’Arcy said.