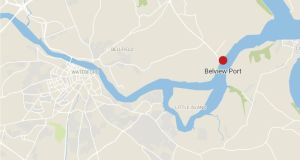 The discovery was made on Wednesday evening at Belview Port near Waterford city.

Eight migrants discovered “hiding” on board a cargo ship at a port near Waterford city on Wednesday are likely to be sent back to France in the coming days.

The discovery was made by the crew of a “bulk cargo ship” that was travelling from St Nazaire in France to Belview Port. Three men fled the ship after being discovered, but were apprehended by gardaí a short time later.

A garda spokesman said the eight migrants, all believed to be adult males from Albania, were found to be in good health.

“Gardaí in Waterford were alerted to an incident today, Wednesday 4th December 2019, in Belview, Co Waterford where eight males were discovered by the crew in hiding on a bulk cargo ship travelling from France to Ireland,” the spokesman said in a statement.

“Garda immigration officers attached to Waterford Garda station are currently dealing with the males and they will be processed under the immigration law.”

The eight men are are believed to have stowed away on board the bulk carrier at St Nazaire before it sailed to Belview Port, where it arrived at around 9am on Wednesday. Port officials alerted gardaí to the presence of the stowaways.

All eight were arrested and brought to Waterford Garda station, where officers began liaising with their French counterparts and discovered that all eight were already registered as migrants on European databases.

After the men were medically examined they were interviewed with the assistance of an interpreter to try and establish their exact movements prior to boarding the ship.

Last month 16 migrants from Iran and Iraq were found in the back of a lorry trailer on a ferry that had travelled from Cherbourg in France to Rosslare Europort in Co Wexford.

Fifteen men were taken into the international protection system and brought to a reception centre in Dublin while a juvenile male was placed in the care of Tusla. Nine of group had left the accommodation they were put in while their applications were considered within days and their whereabouts were unknown.

A garda spokesman told The Irish Times that the eight men found on Wednesday were not asylum seekers, unlike those who arrived in Rosslare, and would be processed under immigration law.

He said that because they were already registered in France, the intention was to process them in Ireland before returning them to France. It is expected that they will be returned on the Rosslare to Cherbourg on Thursday.

The Waterford News & Star earlier this week reported that gardaí in the area were seeking to get more equipment to detect people who had stowed away on board containers. Assistant Commissioner for the South East Region Michael Finn told a joint policing committee meeting that “it isn’t always easy to detect who is on board, you need specialist equipment”.

The meeting also heard that there had been a series of recent operations which involved containers being x-rayed.