Teachers’ strike vote not an immediate threat of shut schools 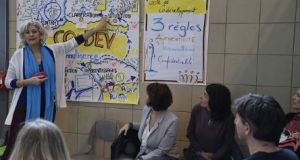 The executive of the Teachers’ Union of Ireland will have to determine whether it will accept the majority decision of the other public service unions to support the new pay deal. File photograph: Getty Images

The decision by members of the Teachers’ Union of Ireland (TUI) to reject overwhelmingly the proposed new public service pay deal and to back industrial action does not necessarily mean there will be strikes in schools in the weeks ahead.

There will likely be a number of turns in the road before the time for any work stoppages is reached.

On foot of Thursday’s ballot results, the executive of the TUI will have to determine firstly whether it will accept the majority decision of the other public service unions to support the new pay deal.

If it does not agree to be bound by the majority decision, the TUI will have to decide on the type of industrial action it would want to pursue and when, and in what circumstances this should take place.

The new public pay agreement, known informally as Lansdowne Road II, will be ratified formally by the public service committee of the Irish Congress of Trade Unions (Ictu) at a meeting on Monday.

To reach this decision, under Ictu rules each affiliate union is given a “weight” based on its membership size. As large unions such as Siptu and Impact, and others such as the Public Service Executive Union, the Prison Officers Association and the Association of Higher Civil and Public Servants, have already backed the accord in individual ballots of members, the new agreement is certain to be formally ratified next week.

That will leave unions such as the TUI and the primary teachers’ union INTO, which have rejected the deal, with a decision to make on whether to go along with the majority view of the other unions despite the vote of their own members, or to pursue their own campaign for better terms.

The TUI said it was its long-standing policy that the union would not be bound by an aggregate vote in matters affecting terms and conditions of employment.

The other large teaching union, the ASTI, last weekend urged its members to reject the proposed public service pay deal, but is unlikely to begin balloting members until next month.

If they reject the proposed agreement outright, teachers will not receive the pay improvements which commence in January. The Department of Public Expenditure said groups outside of the agreement could not expect to receive the benefits of it.

However, if teachers were to undertake any action that would be seen as “repudiating” the agreement, they could potentially face further financial penalties under financial emergency legislation that remains in force.

When ASTI last year ceased working an additional 33 hours per year required under a previous agreement, the Government considered them to have repudiated the deal and imposed a ban on the payment of increments and some other payments.