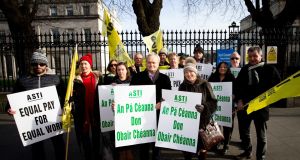 The ASTI leadership had urged members to reject the proposed agreement in the ballot. File photograph: The Irish Times

In a ballot, which concluded on Wednesday, ASTI members voted against the new deal by 79 per cent to 21 per cent.

ASTI president Ann Piggott said the proposed agreement did not resolve the problem of unequal pay in teaching, an issue which the union had been pursuing for more than a decade.

The union’s leadership had urged members to reject the proposed agreement in the ballot.

In January the union’s central executive council said the new accord would not resolve the issue of ensuring equal pay for teachers recruited after 2010 who receive less than colleagues hired before that date.

An overall decision on whether to ratify the proposed new agreement will be made towards the end of February by the public services committee of the Irish Congress of Trade Unions based on aggregate results of the ballots of affiliated organisations. As part of this process, the unions representing larger numbers of members are given a greater weighting.

The ASTI said it would participate in the aggregate vote process.

It said the outcome of the ballot of its members and of the public services committee aggregate vote would be considered by the union executive.

The ASTI is the first of the large public service representative organisations to announce the results of ballots on the proposal which was negotiated in December.

Two other large trade unions, Siptu and primary teachers’ union the INTO, are scheduled to announce the results of their ballots on Thursday. The leadership of both organisations have urged members to accept the deal.

A third education trade union, the Teachers’ Union of Ireland has strongly recommended to members that they reject the proposed agreement. It has not yet finalised arrangements for its ballot.

The largest public service trade union, Fórsa, earlier this week extended the deadline for voting on the proposal to noon on Monday, February 22nd . The union’s leadership has recommended to its 80,000 members that they back the proposed new agreement.

Another large union, the Irish Nurses and Midwives Organisation, this week also urged members to vote in favour of the proposed deal.