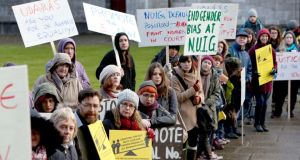 The protest at NUI Galway during the meeting of the Governing Authority of the college. Photograph: Joe O’Shaughnessy

NUI Galway (NUIG) is setting up a taskforce to advise on policies, procedures and a “range of initiatives” related to achieving gender equality.

However, a special meeting of its governing authority on Friday turned down all outstanding appeals by lecturers who had applied for promotion in 2013-2014.

Legal action involving claims of gender discrimination by five female lecturers passed over twice for promotion is expected to continue, but NUIG president Dr Jim Browne has said the university "wants to have an amicable settlement". *

The taskforce, which is expected to comprise 11 women and five men, will be chaired by former Trinity College Dublin vice-provost and dean of engineering Prof Jane Grimson.

Dr Micheline Sheehy Skeffington, whose successful Equality Tribunal action led to the taskforce’s initiation, said it “wasn’t good enough” as the university had so far failed to take “concrete action” on gender balance.

She was commenting after a demonstration outside the governing authority meeting, involving about 100 students, staff and alumni.

The Irish Federation of University Teachers (IFUT) “ acknowledged” the decision to establish a taskforce, but expressed “serious concern that the process is being dealt with secretly and without consultation with staff”.

IFUT deputy general secretary Joan Donegan said membership should be “agreed jointly with staff unions” and it must “engage directly with staff, to ensure full confidence in, and maximum effectiveness of the process”.

After the governing body meeting, chairwoman and former Supreme Court judge Catherine McGuinness and Dr Browne said that the taskforce focus was on expertise, rather than on being “representational”. They stressed it had an “external independent and appropriately experienced chair” in Prof Grimson.

The governing authority “fully” acknowledged the issues for NUIG and was “committed to addressing them.

Dr Browne stressed “affirmative action” had already been taken in the 2013-2014 promotion round to ensure that at least a third of the promotional outlets were filled by women. This action was taken as the university had realised it had a “problem” after the 2008-2009 round, he said.

The governing authority also discussed appeals which were lodged over the 2013-2014 round, and agreed to “close” all remaining 17 on the basis that there were no gender discrimination issues. A large number of these were women. Three of the 20 appeals were promoted last month after a number of “scoring errors” were identified.