Taoiseach to make week-long visit to Mali and Ethiopia

Leo Varadkar will view the work of Irish peacekeepers and NGOs 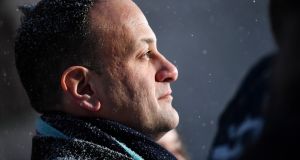 Taoiseach Leo Varadkar will begin a week-long visit to Mali and Ethiopia on Sunday.

It will be his longest continuous visit outside the State since he took office last year.

The main purpose of his trip will be to visit Irish troops serving overseas and to see the work carried out by Irish Aid and non-governmental organisations (NGOs).

His first stop will be in Mali where he will visit the EU Training Mission to Mali (EUTM), and members of the Irish Defence Forces serving with the mission.

The EUTM was founded in 2013 in reponse to an attempt by rebels to annex the northern part of the country and declare it an independent state. Mali is one of the poorest countries in the world and is prone to Islamist extremism.

Mali is one of a number of countries from the Sahel region, the others being Burkina Faso, Chad, Mauritania, and Niger, which the EU are seeking to stabilise as a lot of migrants seek to enter Europe come from those countries.

The EUTM’s role is to improve the capacity of the Malian armed forces to fight insurgents and Islamic extremists.

During his visit the Taoiseach will also meet the Malian president Ibrahim Boubacar Keïta.

He will also meet a number of Irish NGOs operating in Ethiopia, attend a reception with the Irish community and visit the UNESCO world heritage site in Lalibela where he will launch a new partnership initiative on cultural heritage between the governments of Ireland and Ethiopia.

Finally, the Taoiseach will travel to a UNHCR refugee camp for Eritrean refugees and visit Irish Aid funded projects in northern Ethiopia. In partnership with Ethiopian government agencies and UN institutions, Ireland has been operating a development programme there since 1994.