Kenny’s figures for demand inaccurate but ‘overall point is correct’ 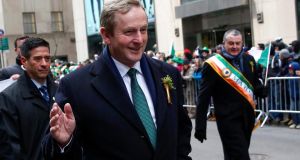 Enda Kenny takes part in the St Patrick’s Day parade in New York. His statements on the property market came on the final day of his US trip. Photograph: Reuters/Shannon Stapleton

Mr Kenny told a business gathering that “if you had 30,000 three-bedroom detached houses in Dublin you’d sell them all in a week. That’s the pent-up demand that’s there”.

He said that the rate of construction would have to pick up radically to restore normal market conditions, stating that there is a need for an extra 25,000 or 30,000 houses a year when the actual number was 6,500 or 7,000.

Angela Keegan, managing director of MyHome.ie, said she agreed that more houses should be built but said that Mr Kenny’s comment was “slightly exaggerated to enforce a point.”


ESRI study
MyHome.ie is owned by The Irish Times. Ms Keegan cited an ESRI study indicating that from 2015 Ireland will require anything between 19,000 to 25,000 homes a year.

She said: “30,000 is probably the requirement over the next two years rather than the next 12 months. Last year, we built less than 1,500 homes in Dublin and there’s nothing telling us this year that we’re going to be building anything more than that.”

Ms Keegan said she welcomed any attempt to ease planning and ensure more new builds on the market.

“He may not have meant the figure he stated but was perhaps trying to show the strength that’s in the market right now,” he said.


‘Strong market’
“In reality there is a pent-up demand, the market is strong and prices are rising because there is a lack of available stock but in the whole of Ireland last year there were only 29,000 sales. The 30,000 figure the Taoiseach mentioned equates to what was sold in the entire country last year.”

He said that 7,000 to 7,500 houses were sold in Dublin last year and Dublin prices have risen by between 5 and 10 per cent since January 1st.

“I think Enda Kenny slightly exaggerated but the overall point is correct; viewing levels for houses and apartments are up to levels we haven’t seen since boom days .”

Mr Lowe said apartment sales were recovering quickly after sharp price drops in recent years. “Prices are rising rapidly for family homes so prices for apartments are improving,” he said.