Swimmers take to the water for annual festive swim

Some of the many people who braved the chilly weather to take a dip in aid of various charities at Blackrock in Galway on Christmas Day. Video: Joe O'Shaughnessy 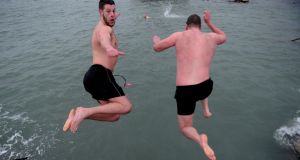 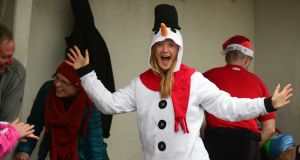 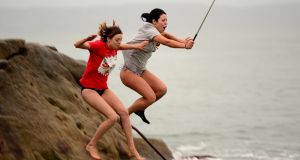 Dozens of hardy swimmers braved the cold conditions to take a morning plunge at Sandycove’s Forty Foot for the annual Christmas Day swim.

With Met Éireann predicting heavy showers of rain and some snow in places, the temperature in Dublin stood at just 4 degrees at 10am .

Many swimmers followed their dip in the cold waters with a hot whisky in an attempt to recover some body heat.

Those participating in other swims and charity events around the country better be prepared for the cold. With outbreaks of heavy rain due across the country, forecasters have predicted snow in some places also.

While many wore standard-issue swimming atire others infused theirs with a festive theme with snowman outfits and Santa hats much in evidence.

Decked from head-to-toe in a snowman’s outfit, Kay Mc Keon from Glenageary looked the part.

Most swimmers took to the waters to raise funds for their chosen charities.

Shane and Niall Murphy from Ballinteer took to the Sandycove waters in support of Aquired Brain Injury Ireland.

Joining them were Andrew O’Sullivan and Aoise Raynor. Linda Heffernan and Jenny Heffernan, also from Ballinteer, recorded their jump with a GoPro camera.

This year sees the first full moon on Christmas day since 1977. The full moon poses an additional hazard to swimmers due to the strong tidal streams it causes around the coast. It also has the effect of increasing the strength and speed of rip currents.

Swimmers are also advised to beware of “cold shock” a condition caused by cold winter waters. Hypothermia can set in within minutes, overwhelming even the fittest of swimmers.

IWS says Christmas day charity swimmers occasionally take chances beyond what is acceptably safe and can find themselves left without sufficient strength to climb out of the water due to the cold.

Warning of the dangers posed by alcohol, Irish Water Safety said it is “a fallacy” that alcohol will keep swimmers warm when entering the water. “In fact it has the reverse effect and could kill you”.

Those brave enough to weather the elements should avoid alcohol before the swim and heed the following advice: “Get in, Get out and warm up”.

Other charity swims around the country include Snámh lá Nollag at the quay at midday in Cill Rónáin, Árainn; Rosses Point in Co Sligo, the Cope in Galway at Blackrock, Salthill, 10am to 1pm, Cork Simon celebrates 22 years of the Christmas swim this year at Whitebay, in east Cork at noon, and the Clontarf Yacht and Boat Club raise funds for the RNLI in Dublinat 12.00pm.

Details of these and other swims around the country can be seen here.