Surviving life in the ‘New Jungle’ in Calais

Archive video: Refugees staying in the ‘New Jungle’ near the French port of Calais take enormous risks trying to get into Britain. They are cheerful despite their situation, but conditions in the camp are taking their toll. Video: Kathleen Harris; Reuters

Irish truck drivers who have been driving through Calais for decades say that refugees have been trying to board their trucks for years, but that the situation has become dangerous in recent months. Video: Kathleen Harris 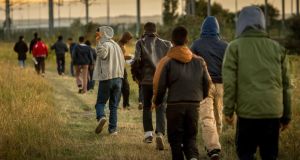 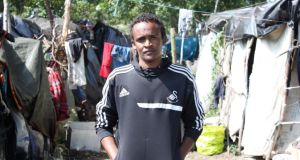 Elias Ali, 21, a law student from Ethiopia, has decided to seek political asylum in France believing it is now too dangerous to attempt a crossing through the Tunnel. Photograph: Kathleen Harris/The Irish Times 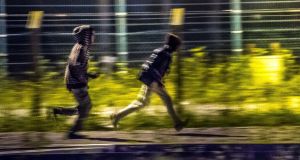 Migrants that have passed a first fence look for another passage to access the Eurotunnel terminal near Calais, northern France. Photograph: Philippe Huguen/AFP/Getty Images

When several thousand Irish construction workers were involved in building the Channel Tunnel more than 25 years ago, tabloid newspapers reported on nights spent “on the rampage” in Dover.

Adil Bujarani (22), from Gujrat in the Punjab province of Pakistan, can hardly believe it. He sits on a plastic bag in a Calais sand dune, showing me a leg injured in an unsuccessful attempt to board a Eurotunnel train.

“So some of the English press were as scared of you in Ireland back then as they are about us now,” Bujarani observes, as I recall documenting the tunnel’s construction, including the racism then experienced by the Irish “tunnel tigers” on the job .

Bujarani, an engineering student who was imprisoned for his political views in Pakistan, is one of countless men, women and children who have sustained injuries in a nightly pursuit which has claimed many lives.

Since June alone, 10 people have died trying to navigate the Chunnel from France to Britain on foot or on high-speed trains.

The Médecins du Monde non-governmental organisation (NGO), which assists over 3,000 migrants in the makeshift camp known as the “New Jungle” outside the port of Calais, treated some 300 people for injuries in July alone.

“Some died in falls, some were electrocuted, some were crushed,” Bujarani explains.

“Women and small children too have tried the trains, the trucks. Sometimes even children on their own.”

The British Red Cross confirms this. It has been working with large numbers of unaccompanied minors who have arrived into Kent from France and are placed in foster care.

Sohail Asam (43) an interpreter from the Peshawar region of Pakistan has also been hurt. His left leg is bandaged, and so he will have to take time off from his nightly three-hour trek to the tunnel entrance.

“I’ve been here five months, and I don’t want to spend the winter here, so I will keep trying,” Asam says.

“I’ve travelled over mountains in Iran, into Hungary, through Europe, paid €8,000, and there were many hurdles. But look how well the boxer Amir Khan is doing in Britain, so that is where I need to be.”

“One of my friends from Pakistan was killed recently, and we are remembering him at a demonstration tomorrow for all the people who we have lost,” Asam adds.

Alex William Chola (37), an electrician from Burundi, came through Sudan and Egypt into Libya, earning enough money en route to travel to Italy by sea.

“It cost me €65 to buy the ticket from Paris to Calais by train.”

“I want to learn English because it is easier than European languages, and that will increase my job certainty,” Chola says.

As he talks, he is queuing for access to the Jules Ferry Centre, a former children’s leisure centre some 7km from the centre of Calais.

Named after a late 19th century French prime minister, who – as non-governmental organisation Calais Migrant Solidarity notes – was an advocate of colonialism, the Jules Ferry complex serves as a day centre for the many nationalities in the adjoining “new Jungle”, while some vulnerable women and children are accommodated within its confines.

As noon comes and the gates open, there is a sudden surge as dozens race in to use showers.

The centre serves hot meals to 2,000 people, and provides clothes-washing facilities and access to powerpoints to charge mobile phones.

After that, migrants rely on the generosity of local charities and NGOs, including Caritas France, le Secours Islamique France and Auberge des Migrants, to survive.

Ethiopian law student Elias Ali (21) made the home he shares with six people out of plastic sheeting and blankets provided by the NGOs, draped over bound branches cut from nearby trees.

“Here is the salon, here are the bedrooms, here is the kitchen, but we have no shower,” he says proudly.

“We have no water, no electricity, but we have this candle.”

As woodsmoke curls up through the copse nearby, he describes how he was jailed for three months in Ethiopia on suspicion of opposing the government.

“The boat had food and water for only 11 days, and we were at sea for 16. So one 75-year-old Syrian woman, who was very tired, died and her body was on the boat with us for the last five days,” he says, eyes welling up with tears.

Elias Ali was one of several migrants who told The Irish Times yesterday that trying to cross to England was proving to be too dangerous. “I am going with my friends to give fingerprints and apply for asylum in France today . . . and then I want to continue to study law and specialise in human rights . . .”

“We collect tents, clothes, food and materials to give to people here, as they are living in very difficult conditions because of a shortage of asylum centres in France,” Guennoc says.

“I feel as a French person that we have a responsibility to people who have come from Libya, Iraq and Afghanistan where there has been so much conflict, and, after all, we need young energetic people in Europe because it was originally built on migrant labour,” Guennoc says.

As he notes, the “Calais crisis” is not new. It was back in 1999, just five years after the Channel Tunnel was opened by Queen Elizabeth and French president François Mitterrand, that a camp for those fleeing conflict in Iran, Afghanistan and Sudan, the break-up of Yugoslavia and the persecution of Kurdish peoples was set up by the French Red Cross in Sangatte.

The temporary residents of the enormous warehouse near the tunnel entrance became known locally as “Kosovars”, even though only a percentage of them came from the former Yugoslav region.

Under pressure from Britain, the French government closed Sangatte in November 2002, but that didn’t stop refugees coming to the port in search of a better life.

Some 53 per cent of that global total come from Syria, Afghanistan and Somalia. Just over half of the 60 million are children, the UNHCR notes.

Inevitably, this increase has had an impact on border points like Calais and Ventimiglia on the Italian-French border, and on the most lethal frontier of them all – the trafficking route across the Mediterranean Sea.

Calais began to make headlines for all the wrong reasons earlier this summer when a decision by Eurotunnel to sell its MyFerryLink ferries to the Danish-owned DFDS company resulted in protests by French staff over the loss of 600 jobs.

French dockers supported their ferry company colleagues, there were long traffic delays and migrants took advantage of the tailbacks by attempting to stow away on British-bound trucks.

Irish Road Haulage Association (IRHA) members were caught up in the chaos, and some Irish drivers have related experiences over the past few weeks of incurring fines for unwittingly transporting stowaways, and penalties for breaching driver rest rules, while others have sensed an “increasingly desperate” mood among migrants.

“It used to be that you’d tell them to get out of your truck, but now some are much more forceful, and you never know how many could be in around the back of your vehicle,” haulage company director Joe Druhan, an IRHA member from Lady’s Island in Co Wexford, says in Calais.

Drivers have been threatened at knifepoint, and some have been robbed, he says, while others transporting perishable goods have lost thousands of euro.

Haulier Seán Maguire from Dundalk, who works for his brother’s company, says he cannot afford delays when transporting fresh mussels.

“And then if migrants get into your truck, the load is written off as contaminated. And if you report they are on board, you are branded as a trafficker and fined when it isn’t your fault,” he says.

Druhan, who pioneered the lucrative Libyan market when he began delivering beef carcasses to Gadafy for Slaney Meats in 1976, has driven all over the globe. He finds this “third world within a first world” in Calais to be “absolutely surreal”.

“You see that bridge there,” he says, pointing to a flyover now manned by French police, close to the “New Jungle”.

Lorries turning off the motorway and driving under the pass have experienced migrants jumping from the bridge on to roofs. “Some have sustained awful injuries and it’s terrifying for the drivers,” Druhan says.

The British and French governments have recently committed to a joint fund of €15 million for fencing and other security measures at Calais, along with further monies to secure the Channel Tunnel at Coquelles.

Druhan and his fellow director and IRHA president Verona Murphy believe this is sticking plaster on a situation which requires a long-term European-wide approach.

“Calais is our quickest and cheapest port, and we are caught in the middle of this,” IRHA Verona Murphy says, expressing disappointment at the response so far from Minister for Transport Paschal Donohoe.

“But the 3,000 people here, and the refugees reaching other parts of Europe, are a small fraction of the total worldwide,” UNHCR spokeswoman Celine Schmitt stresses. Turkey is still taking the largest number of refugees, followed by Pakistan and Lebanon, she notes.

Calais people have shown solidarity towards the migrants, even if the official response has been found somewhat wanting. Schmitt tells of a small village in France which had lost its doctor, and feared its school would shut.

“Refugees were relocated there; one was a qualified doctor, and so they kept their medical service and their school,” she says.

“Immigration is an opportunity. It should not be seen as a problem,” he says.