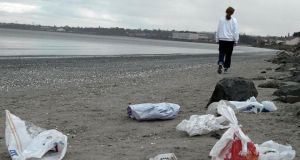 A landfill site in Bray, Co Wicklow, is still the “worst pollution eyesore” on the Irish coast, according to a marine litter survey by Coastwatch Ireland.

The results of the citizen science project, published in Galway at the weekend, state that the presence of dog waste has increased on Ireland’s shorelines.

Dog waste was found on 23 per cent of shores surveyed last year, up from 15 per cent two years earlier.

The use of bags to collect dog excrement, but which then are not disposed of properly, may account for the “offputting rise”, according to the survey. Coastwatch Ireland has also called for legislation on the disposal of used tyres to be enforced, noting that hundreds were found on some shores, with some being used to catch peeler crabs.

The survey also identified defunct oyster trestles from shellfish farms as a problem, with reports of rubber and metal hook ties and oyster bags being washed up in several areas.

The all-island coastline survey found the Northern Irish coastline to be “somewhat cleaner” than that of the Republic in most litter categories.