Stepaside Garda station: Taoiseach has no objection to publication of report 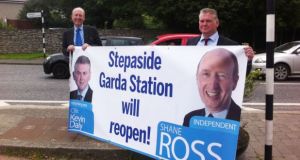 Shane Ross said ‘the Government decision to close Garda stations was wrong, and the worst case of it in the country was on my doorstep’. Photograph: Mark Hilliard

Taoiseach Leo Varadkar has “no objection” to the Department of Justice publishing an interim report on the reopening of six Garda stations.

Pressure is growing on the Minister for Justice Charlie Flanagan to publish the findings of the review, which recommended the reopening of Stepaside Garda station.

The reopening of this Garda station in the constituency of Minister for Transport Shane Ross and has led to accusations of stroke politics. Mr Ross made the reopening of the station a key condition of his support for the Fine Gael coalition government.

Speaking in Estonia on Friday, Mr Varadkar said he had not seen the Garda report but had “no objection to it being published”.

He added: “Look, anyone who reads the Programme for Government will see that there were negotiations that were contained in that programme that commitment that we would reopen six Garda stations on a pilot basis.

“The gardaí did a report. Six have been identified and they are going to be opened and Stepaside is not yet opened but it is going to be.”

This position was echoed by Mr Ross who told The Irish Times on Friday he would welcome the publication of the report by the Minister for Justice.

The interim report was lodged with the Government on June 9th, and the Cabinet considered it on June 13th, the same day Mr Ross said publicly Stepaside Garda station was reopening.

The Irish Times understands the report compiled by Assistant Commissioner John O’Driscoll examined 139 stations which had been closed and recommended four for reopening.

Rush, Co Dublin, Donard, Co Wicklow, and Leighlinbridge, Co Carlow, were identified as possible locations but the report stressed a decision should not be made until the final report is compiled.

Only one firm recommendation was made and that was to reopen Stepaside.

Mr Ross has denied “stroke politics” were involved in the decision, stressing he had campaigned to reverse the closure of all Garda stations.

The Minister said he had campaigned for the reopening and it was part of the programme for Government.

“I was absolutely convinced it would be included among the six [to be reopened]. It was an absolutely outstanding case,” he said.

“How could it be cronyism? I used my clout to change Government policy on the closure of Garda stations across the country.

“I campaigned absolutely openly that Garda stations should not have to be closed. The Government decision to close Garda stations was wrong and the worst case of it was on my doorstep.

Mr Ross said the review was taken on the basis of criminal activity in the area, a rising population and how the local community felt.

Sinn Féin deputy leader Mary Lou McDonald said the Government should publish the interim report into the reopening of the Garda stations.

She said the criteria for reopening Garda stations were not set by An Garda Síochána, but by the Department of Justice.

She pointed out the interim report also recommended the urgent reopening of Rush in north Dublin but this had not happened.

Mr Ross countered by stating that Fitzgibbon Street Garda station, in her own Dublin Central constituency, was reopened.

Public Accounts Committee (PAC) chairman Seán Fleming said the only way to remove any confusion about the decision was to publish the interim Garda report.

The acting Garda Commissioner said this was a decision for the Department of Justice, which has declined to release the interim report.