Stepaside was only station Garda recommended for reopening

Assistant Commissioner examined 139 closed stations to see which should reopen 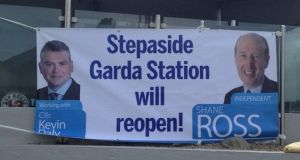 A banner placed in Shane Ross’s constituency shortly after the decision to reopen Stepaside Garda station was announced. Mr Ross said last night none of his political colleagues had promised to reopen the Garda station.

An interim report into the reopening of six Garda stations made only one firm recommendation, which was to reopen Stepaside Garda station, it has emerged.

The Irish Times understands the unpublished report compiled by Assistant Commissioner John O’Driscoll examined 139 stations which had been closed and recommended four for reopening.

Rush, Co Dublin, Donard, Co Wicklow, and Leighlinbridge, Co Carlow, were identified as possible locations but the report stressed a decision should not be made until the final report is compiled.

Minister for Transport Shane Ross, who is one of a number of Independent TDs in Government,  has denied accusations of "stroke politics" with regard to the re-opening of the Stepaside station, which is in his constituency.

Garda and Government sources on Thursday night confirmed the interim findings, which were considered by Cabinet on June 13th, proposed Stepaside should be opened initially on a pilot basis.

Mr Ó Cualáin had told members when the Garda recommended to the Government in June that Stepaside be reopened, it also recommended Rush in north Co Dublin should be reopened.

However, the Government chose Stepaside, which is in the constituency of Minister for Transport Shane Ross.

However, gardaí moved to clarify that account on Thursday night.

The PAC is now seeking further clarity on the interim report and is seeking evidence from a number of witnesses.

Chairman of PAC Seán Fleming said there were a number of questions that remained unanswered in particular from Mr Waters.

Mr Fleming told The Irish Times the evidence given by the acting commissioner had proven the Government “had politicised the gardaí”.

He added: “There was a political decision to be made and they used the gardaí to provide cover.”

The Programme for Partnership Government committed to the reopening of six Garda stations, at the discretion of the commissioner.

The Government set the criteria for the research including an insistence that the ones to reopen must be in ownership of the State.

It also included ensuring there was an urban and Dublin dimension to the scheme, having regard to population and crime trends, limiting the choice to stations which were in State ownership, and considering those that can be opened with the least delay.

An interim report was lodged with Government on June 9th, and the Cabinet considered it on June 13th, the same day Mr Ross made a statement announcing Stepaside in his constituency was reopening.

The report also stressed its preference for new stations to open at Dublin Port and Dublin Airport.

The PAC was told it could not have access to the findings of the report or the criteria which chose Stepaside station. The acting Garda commissioner said this was a decision for the Department of Justice, which has declined to release the interim report.

On Thursday night, Minister for Transport Shane Ross said: “I never had any input into this report whatsoever… We left it completely to the gardaí to decide which ones should be chosen.”

He rejected the suggestion that the Cabinet decided to “cherry pick” Stepaside from a list of stations. Rather, the report said the case for reopening Stepaside was “absolutely compelling”, while “there were another three which must be considered”.

Speaking on RTÉ’s Prime Time, Mr Ross also rejected the claim that Leo Varadkar before becoming Taoiseach had promised Mr Ross to get Stepaside reopened. “Nobody ever promised me that Stepaside would get over the line.”

Fianna Fáil TD Marc MacSharry has written to the committee members asking for Mr Flanagan, Mr Waters and Mr Barrett to give evidence about the decision.

The Labour TD said: “It is entirely obvious from the proceedings that the opening of Stepaside was a political stroke delivered for Mr Ross.

“The idea that the Garda Commissioner just picked one station to reopen without any political interference by using the same criteria to justify that opening as was used to close it two years is not credible.”