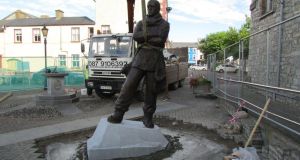 A century to the day since Sir Ernest Shackleton rescued the crew of his ship Endurance from Elephant island in the Antarctic ocean, a bronze statue to the polar explorer has been unveiled in his home county of Kildare.

The statue, which was commissioned from sculptor Mark Richards by Kildare County Council as part of its decade of commemorations programme, has been billed as the first public monument to the explorer in his birth county and state.

A Naval Service guard of honour and colour party paid tribute to Shackleton’s life at sea, and Athy singer Jack L performed The Wearing of the Green, which was originally sung by Kerryman Tom Crean on an epic trip with Shackleton to rescue their crew in 1916.

“I felt jolly near blubbing for a bit and could not speak for several minutes,” team member Frank Wild wrote after Shackleton’s arrival back on August 30th, 1916, on the steamer Yelcho to rescue the crew of the Endurance (italics).

The Endurance crew of 28 had set out in 1914 to make the first traverse of Antarctica via the South Pole, but the ship became trapped and crushed in pack ice. On April 24th 1916 , Shackleton and five crew, including Irishmen Tom Crean and Tim McCarthy set out in a timber lifeboat on an 1,300km sea journey to South Georgia to get help for their 22 comrades stranded on Elephant island.

With no loss of life, it is regarded as one of the most famous sea rescues on record.

Shackleton was born in Kilkea, near Athy, in 1874, but moved to England when he was ten years old and left school at the age of 16 to go to sea. He qualified as a master mariner, participated in Robert Scott’s Discovery expedition to the Antarctic from 1901 to 1904, and led his own team south in 1908 to come within 97 geographical miles of the South Pole. The Endurance was his third expedition south.

Earlier this year, the British embassy in Ireland held a reception to honour the members of the Imperial Trans-Antarctic Expedition of 1914-1916, with then ambassador to Ireland Dominick Chilcott describing the Kildare man’s exploits as “pure Spielberg”. Mr Chilcott also said he hadn’t known of Shackleton’s Irish lineage until his own diplomatic posting here.

Seamus Taaffe of the Shackleton autumn school said that the statue unveiling marks an important milestone in efforts by the Athy Heritage Centre-Museum to develop a Shackleton museum in the town.

The museum recently acquired the ship’s cabin in which Shackleton died, and which was located by Corkman Eugene Furlong in Norway. It is currently being restored in Letterfrack, Co Galway, with a view to relocating it to Co Kildare.