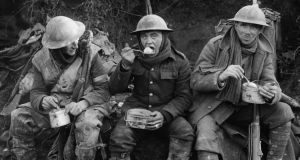 British soldiers eating hot rations in the Ancre Valley during the Battle of the Somme, October 1916. Photograph: Lt E Brooks/IWM via Getty Images

A performance of Frank McGuinness’s play Observe the Sons of Ulster Marching Towards the Somme will be performed on the site of the Battle of the Somme next year, it has been announced.

The Abbey Theatre is co-ordinating a production with the Irish embassy in Paris which will take place in June 2016 before the centenary commemorations of the start of the battle.

The staging of the play will be one of the highlight’s of the Government’s Battle of the Somme Commemorative Programme 2016 which has been announced.

There will be four programme strands; ceremonial; historical and education reflection; cultural; and community participation.

“2016 is a very important year for Ireland as we commemorate events that shaped the history of our island over the last 100 years,” he said.

“In recent years we have all come to a greater understanding of the many strands of our history from that period. In commemorating the Battle of the Somme, we are remembering all those from this island who died during this terrible period in 1916.

“We remember the huge losses experienced by the 36th Ulster Division and the 16th Irish Division and the indescribable impact that this had on the island of Ireland - a loss that has transcended generations.”

The battle lasted from July 1st to November 13th and claimed 1.2 million casualties, 420,000 of whom were British and Irish. The 36th (Ulster) Division lost more than 2,000 dead on the first day of the Battle of the Somme alone while the 16th (Irish) Division suffered more than a thousand dead at the battles of Guillemont and Ginchy in September 1916. In addition thousands of Irishmen died in other regiments during the battle.

The principal commemoration for the Battle of the Somme will take place at the Thiepval Memorial on July 1st, 2016, jointly hosted by France and the UK (co-owners of the site). Ireland will be officially represented at a high level at this event.

Residents in the Republic have been allocated 500 tickets for the event which will be decided by public ballot.

A military ceremony will be held at 7.20am on July 1st, 2016 at the Irish National War Memorial Park, Islandbridge, honouring the Irish Regiments who fought at the Somme and during the war.

A State-led commemoration will take place onJuly 9th 2016 at the Irish National War Memorial Park, Islandbridge, in conjunction with the Royal British Legion, on the same weekend as the National Day of Commemorations.

There will be state involvement aon September 3rd at Guillemont which marks the centenary of the battle involving the 16th (Irish) Division.

On September 9th, UCD will host an event to mark the Battle of Ginchy and the death of UCD graduate and Professor of Economics Tom Kettle.

The Other Voices project, involving the National Museum and Poetry Ireland, with Dermot Bolger as poet-in-residence (March to August 2016), will explore the stories of Irishmen at the Somme and those who were involved in the 1916 Rising

The National Archives of Ireland will highlight its digitised collection of wills from soldiers killed in the first World War.

A series of commemorative stamps to mark the centenary of Sommewill be issued by An Post next year.

Glasnevin Cemetery will present an outdoor exhibition starting on July 1st with a focus on the 36th Ulster Division, changing in September to reflect the participation of the 16th Irish Division in September 1916.