Stamps of approval for Joe Schmidt and Johnny Sexton 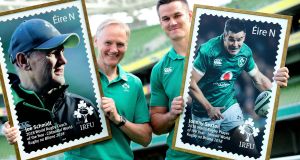 While stamps are normally beyond the pale in rugby circles, they were front row and centre in the IRFU’s corporate box at the Aviva Stadium as Ireland’s head coach and star player sat down in front of a hand-picked crowd to look at giant pictures of themselves.

Joe Schmidt and Johnny Sexton had the decency to appear mildly embarrassed as the two €1 stamps bearing their faces were unveiled on a big screen behind them by An Post chief executive David McRedmond ahead of the start of the World Cup in Japan next month.

Mr McRedmond pointed out “as a republic we have no honour system” and said there was almost no chance of the rugby greats adding a Sir or Lord to their names.

He said one of the few ways people could be honoured by the State came in the form of stamps which had to get the seal of approval from the Cabinet before they could be released.

He added that the two were in a select group of people who had been given the stamp of honour while still alive and – at least in Sexton’s case – kicking.

Both the head coach and his number 10 told RTÉ sports journalist and event MC Damian O’Meara that they had been humbled by the honour .

Then the conversation turned to stare down the elephant in the room – last weekend’s performance against England at Twickenham which had left the entire Irish set-up almost as humbled.

Schmidt joked that the walloping had been carefully engineered as part of a “cunning plan” to manage expectations for the challenges that lie ahead, starting with Ireland’s first pool game against Scotland at the end of next month.

Adopting a more serious tone, he described the result as “unacceptable” and expressed the view that there would be better days ahead, starting with the weekend clash against Wales.

Sexton said the match had not been pleasant viewing but said, “We are building for that Scottish game and we are at a different stage of our preparations to England”.

After the public interview concluded the head coach and the kicker went out onto the Aviva stadium’s turf to pose with framed pictures of their stamps.

“At least you have a good action shot, I look like a grumpy old man,” Schmidt told his star player with a laugh as they walked.

He was, perhaps, being a bit harsh on himself. His stamp image looks neither old nor grumpy but very, very focused.