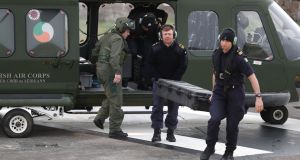 The Defence Forces were unable initially to assist in Monday night’s medical evacuation mission off the west coast because of a shortage of experienced Air Corps pilots and air traffic controllers.

A Sikorsky S-92 search and rescue helicopter, contracted to the Irish Coast Guard and designed for maritime work, was dispatched to help. It was piloted by Capt Dara Fitzpatrick, with crew of Capt Mark Duffy, winch operator Paul Ormsby and winchman Ciaran Smith.

En route to assist in the medical evacuation of an injured trawler fisherman, the helicopter went down in seas off the northwest Mayo coast.

Some three hours and 45 minutes later, the Air Corps joined in the search and rescue efforts after it received a second request for emergency assistance

Confirming that the Defence Forces had received a request for assistance in the initial medical evacuation, the Air Corps yesterday said in a statement that “it was not possible to undertake this task as Air Corps fixed-wing aircraft were not available. . . This is because of a loss of experienced personnel.”

A military source said the problem of personnel shortages has become acute of late.

It is understood overall numbers in the Air Corps are 21 per cent below target – 695 personnel on a desired establishment of 886. The depletion equates to a saving to the Department of Defence of some €7 million in annual unpaid wages.

However, when it comes to experienced personnel – the sort who would have been involved in Monday’s rescue mission – the depletion is more acute, with the corps being almost 30 per cent down on experienced pilots and air traffic control staff. “We have had a devastating number of experienced people leave in the last couple of years,” said the source.

The result of people being enticed into the private sector has meant that of 107 pilot positions in the Air Corps, only 78 are filled to operate 27 aircraft. A source said 51 pilots have left the Air Corps since 2010. The Air Corps no longer has the capability to provide air traffic control on a 24-hour basis.

Their duties include emergency helicopter assistance to the national ambulance service, maritime surveillance, supporting Garda operations and joint operating with the Army Ranger Wing and the Naval Service.

At 10.06pm on Monday, the Air Corps was asked to assist a Sligo-based search and rescue helicopter which was carrying out a medical evacuation from a trawler west of Eagle Island, Belmullet.

The request for Air Corps assistance was for what is termed “top cover”, also known as “over watch” support. When possible in such circumstances, the Air Corps dispatches one of its two Casa CN235 maritime patrol, fixed-wing aircraft to assist.

The Casa CN235 has a five person crew – two pilots, two saros (sensor and radar operators) and a signals (comms) operator who is also a photographer – and is normally used mainly for maritime patrols.

In search and rescue missions, where a Casa is dispatched to give top cover, it will usually arrive above the scene before the rescue helicopter as it can travel twice as fast. Circling in position, the Casa crew can assess the situation using “eyes on” (their own visual surveillance) plus infra-red and spotter scope camera equipment.

Information gathered is then used to alert the following helicopter as to what to expect so its crew can ready themselves accordingly. The Casa can remain circling in its higher vantage point for up to nine hours as the rescue proceeds, advising the helicopter as necessary.

“It’s not used for routine search and rescue missions,” said a military source. “It is basically like a big brother, although it does also have flares and can launch a life raft.”

The Department of Defence said the Air Corps staff shortage is being addressed, noting there are currently 28 cadets, of whom eight will graduate by the end of this year. However, military sources point out that, after graduation, it will take a further year’s training for any of them to be allowed fly as a co-pilot and up to five years before they would be capable of flying a Casa CN235.

The source said other areas of speciality within the Defence Forces – including EOD (explosives ordnance disposal – ie detection and clearance of mines and improvised explosive devices, IEDs), Naval Service engineers, and naval watch keepers (personnel in operational charge of a vessel) – were also in short supply.