News, colour, features, opinion and photos from around the world in one place 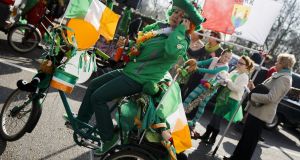 The time of year when people around the world grab as much green as possible and celebrate Irishness and being Irish is almost upon us.

Here at irishtimes.comwe will keep you updated on all events happening locally and across the world for St Patrick’s Day.

On Thursday, Patrick Freyne will be manning our liveblog, discussing being Irish, what is happening nationwide and globally, the latest from the parades and everything you need to know to get you through the day.

In a nostalgic mood, Michael Harding today writes about how he still has lingering regrets from St Patrick’s Day in 1976.

“I could have gone in and shared my flask of whiskey with him at the fire, but I didn’t,” he writes. “I felt at the time that it would have been too painful for him or me or both of us to admit defeat or embrace the solitude. But 40 years later, on St Patrick’s Day in 2016, I still regret that I drove away.”

It is time to celebrate everything Irish and for those of you who do not want to drown the shamrock to celebrate St Patrick’s Day, here are seven things to do without the booze.

We have details of 14 parades across the world from Perth in western Australia to Hawaii.

In the Caribbean island of Montserrat, the celebrations continue for a full week.

More than half of island’s inhabitants were Catholic Irish in 1678.

The best photographs from around the world are showcased in our pic gallery here.Dave O’Connor, who is employed as a radio host on U93 Radio in Indiana, shares his story on working abroad. Dave, from Shankill in Dublin, explains how his American audience reacts to his Irish accent.

Our acting Taoiseach Enda Kenny seems keen to keep celebrating St Patrick’s Day in the overseas and not return to Dublin. Mr Kenny joked while in the US: “Bejaysus, I wish I didn’t have to go back to Ireland to face what I have to face.”

He was attending a reception hosted by the Irish Ambassador to the US Anne Anderson in Washington.

Back in our own green isle, we have a preview of what can be expected at parades in Dublin, Cork, Galway and Belfast.

a number of roads in the city centre will be closed or have restricted access from Wednesday evening due to Thursday St Patrick’s Day parade.

There will be no parking on all road closures from 7pm on Wednesday and diversions will be place.

Heuston and Connolly train stations will “glow green” on Thursday as part of the celebrations.

Services for the day will run under a revised schedule. Extra trains will run before and after parades. In Dublin, Tara St station will be closed for crowd control reasons until 4pm.

People who use the Luas can breathe a sigh of relief as the strike has been called off after 27 hours of negotiations.

How much do you know about the shamrock? The botanical identity of the plant we call the shamrock is a matter of some debate.

The national symbol we wear proudly on St Patrick’s Day can be one of a number of plants.Dominique McMullan looks at what does it mean to be an Irish designer now? The last five years have seen an explosion of talent in Irish design, highlighted in 2015 by the team behind the Year of Irish Design.

Laura Kennedy writes about how St Patrick’s Day is nothing to be proud of but our feisty nation is.

“What is wrong with us?,” she asks. “We drink too much. Our state is grounded in a religious ideology most of us don’t practise. We have a history of creating a hostile environment for our best and brightest so that they feck off, and rather than rewarding hard work we begrudge those who reap its benefits rather than celebrating them.”