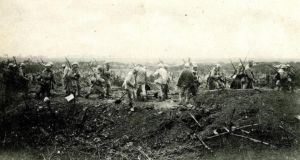 Battle of the Somme: soldiers at the trenches at Dompierre Becquincourt. Photograph from the Royal Dublin Fusiliers Collection held at Dublin City Archives

A new exhibition commemorates the thousands of Dubliners who fought and died during the Battle of the Somme.

Dublin Remembers: Stories from the Somme is based on material from the Royal Dublin Fusiliers Association which were placed in the Dublin City Council archives.

The exhibition at the Dublin City Library and Archive in Pearse Street features stories of those in the Royal Dublin Fusiliers who fought in the war.

Among them was Second Lieut Herbert Lemass (17) from Blackrock who was commissioned as an officer in the RDF in 1914. He was killed two years later at the age of 19 during the Battle of the Somme. The centenary of his death is on Sunday.

His first cousin was Seán Lemass who, at 16, was one of the youngest volunteers to fight in the Easter Rising. He would go on to become taoiseach. Herbert is buried in Caterpillar Valley Cemetery in the Somme.

On the 50th anniversary of the Battle of the Somme, Lemass, then taoiseach, said: “In later years it was common – and I was also guilty in this respect – to question the motives of those who joined the new British armies at the outbreak of the war but it must, in their honour and in fairness to their memory, be said, that they were motivated by the highest purpose.”

Also in the exhibition is Pte Edward Brierley who won the Military Medal, one of the highest honours for bravery. He won three medals for bravery during the war and survived. After the war he joined Shelbourne Football Club and played in the 1923 FAI Cup Final.

Richard Burke of the Royal Irish Regiment won a bravery award at the attack on Ginchy in the Somme. His daughter Muriel (90) attended the launch.

Opening the exhibition, Lord Mayor Cllr Brendan Carr said it was “vitally important” to remember everything that happened in 1916 and not just the Easter Rising.

“A lot of our brave men went over there [to the Somme] and lost their lives and were not given the same recognition. They deserve to be commemorated,” he said.

“This is Dublin City Council’s contribution to ensure that these men are remembered. I’m not sure we have taken the time out in our State to commemorate them the way we should have.”

The regiment was involved in the first day of the Somme, the last day (November 13th) and at the battles of Guillemont and Ginchy in September 1916.

“We can truly say when we look at the stories from the Somme that there cannot be a street in Dublin or a village or town in Ireland that was not in some way touched by the Somme or the Great War,” he said.

Also present were the Newtownabbey Arts and Cultural Network who performed from their first World War film The Rose and the Fusilier.

It is about husband and wife John and Margaret Naylor who were both killed on April 29th 1916 during Easter Week. John died during a gas attack on the Western Front; his wife was killed crossing Ringsend Drawbridge by a sniper on the last day of the Easter Rising. Their three children were left as orphans.

The Rose and the Fusilier will receive its Dublin premiere on Saturday, October 22nd in the Irish Film Institute in Temple Bar.