SNP’s Alex Salmond back in London with no regrets 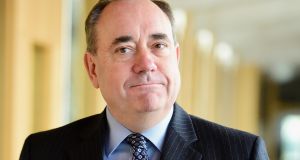 Former first minister and leader of the Scottish Nationalist Party Alex Salmond: “I think it would be very difficult for any Irish government, of any political persuasion, to run counter to Scottish nationalism.” Photograph: Jeff J Mitchell/Getty Images

For a man who just returned to Westminster last May after an eight-year absence, Alex Salmond moves through the Houses of Parliament as if he had never left the place, greeting everyone he passes and exchanging banter with staff, most of whom he appears to know by name.

Salmond only stopped being an MP for five years. From May 2007, when he became Scotland’s first minister, he was based in Edinburgh and made only occasional forays to London. Everything changed on September 19th last year, the day after Scotland rejected independence in a referendum by 55 to 45 per cent, and Salmond resigned as first minister and leader of the Scottish National Party (SNP). It was, he admits over coffee in the plush Victorian Gothic surroundings of parliament’s Pugin Room, a painful moment.

“I think you probably detected that from the speech,” he says. “It wasn’t a bad resignation speech. If you make the journalists cry, you know you’re doing well.”

Salmond, who led his party for 20 years – from 1990 to 2000 and again from 2004 to 2014 – and served two terms as first minister, is now an ordinary MP; his only official role is that of SNP foreign affairs spokesman at Westminster.

Under his successor, Nicola Sturgeon, the Scottish Nationalists have gone from strength to strength, winning 56 out of Scotland’s 59 Westminster seats in May and on course for another majority in the Scottish parliament next year.

So was his resignation a rare miscalculation, a misjudgment of the likely impact of the referendum defeat on the SNP’s fortunes? “I didn’t resign because I thought the SNP were going to do badly,” he says. “I thought my resignation was part of the SNP doing extremely well. And there’s nothing the Scots like better, or have more affinity with, than somebody who’s done down by the forces of the Establishment.

Salmond is in Dublin this weekend, appearing on RTÉ television this evening and speaking at the Trinity College Law Society on Monday. He knows Ireland intimately and can discourse in detail on the intricacies of party politics North and South.

Taoiseach Enda Kenny has adopted a recent high profile in Britain, making clear Ireland’s preference for Britain remaining part of the EU, but during Scotland’s independence referendum, the Government was silent.

I put it to Salmond that this official silence was an expression of the Government’s calculation that Scottish independence was against Ireland’s national interest. “Perhaps they didn’t want to say what their interest was,” he says. “I think it would be very difficult for any Irish government, of any political persuasion, to run counter to Scottish nationalism.”

Salmond will campaign for Britain to remain in the EU, although he is scornful of David Cameron’s referendum strategy. Cameron this month outlined a number of reforms he wants before he will campaign in favour of continued EU membership.

“So we’re actually going to determine the future of the United Kingdom in the European Union on the basis of whether or not hardworking Polish migrants get to send their child benefit back to Warsaw,” Salmond says, “or have to wait four years to do it. Is this what’s going to determine the future of the European continent in the gospel according to David Cameron?

“I’ve never seen an attempt to fight so great an issue on so flimsy a platform.”

He is equally withering about the decision to make former Marks & Spencer boss Stuart Rose frontman for the EU campaign and to focus on the economic disadvantages connected with leaving.

“If you want to inspire people to vote for something,” he urges, “then you’d better have an inspiring argument, not just the clink of glasses or the ringing of tills or entrenched corporate interests, which most people find at best uninspiring, at worst offensive.

Salmond says negative campaigning against Scottish independence helped to drive more voters towards the pro-independence camp, whose support rose from 28 per cent to 45 per cent in 18 months.

Last month Sturgeon identified a referendum scenario in which the UK votes to leave but a majority of Scots vote to stay in as a potential trigger for a second Scottish independence referendum. Salmond agrees, adding that other political factors, such as continued austerity or another Conservative election victory, could also push Scots towards independence. Jeremy Corbyn’s election as leader of the Labour Party is, he says, another such factor.

“I’ve known him for 30 years,” he says. “A lovely guy etc, etc, etc, but he’s unelectable. And remember: Labour’s position in Scotland depends on electability. We didn’t like them that much. Through their years of supremacy, it wasn’t that they were liked, it was that they were electable.

“I mean, Scotland never really took to Tony Blair, but he got resounding majorities because he was electable. And in his early years, until he started bombing places, he was quite effective.”

Alex Salmond will be a guest on The Ray D’Arcy Show tonight on RTÉ One at 9.50pm