Smuggler gets 16 years over plot to traffick €80m cocaine shipment 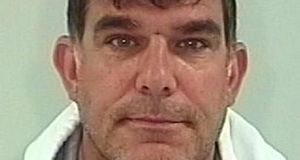 Stephen Powell: has been jailed for his part in a plot to smuggle more than €80m worth of cocaine into the north Wales. Photograph: PA 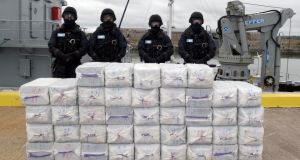 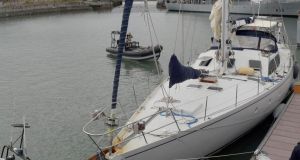 The yacht Makayabella which was intercepted by the Irish Naval Service about 250 miles off the southwest coast of Ireland on September 23rd. Photograph: PA

A 48-year-old English man has been jailed for 16 years for his part in a plot to smuggle €80 million worth of cocaine into Wales that was foiled by Irish authorities working with counterparts in the United Kingdom, Europe and South America.

Stephen Powell of Netherfield Road in Guiseley, West Yorkshire, was arrested following the interception of the yacht, Makayabella by the Irish Naval Service about 250 miles off the southwest coast of Ireland on September 23rd.

The yacht which was carrying about a tonne of cocaine worth an estimated €80 million worth of cocaine was detained by the Naval Service in a joint task force operation with the Customs & Excise and An Garda Síochána.

The operation to track the vessel as it crossed the Atlantic from the Caribbean involved the Irish authorities, National Crime Agency (NCA) and National Maritime Information Centre in the UK as well as French and Venezuelan authorities.

The successful international operation to foil the smugglers also involved the Maritime Analysis and Operations Centre (Narcotics) based in Lisbon in Portugal.

NCA investigators in the UK identified Powell as having purchased the Makayabella and another vessel, the Sea Breeze, which was to be used to meet the Makaybella and collect the drugs off the Irish coast before bringing them ashore at Pwlheli in north Wales

However, the plan hit the rocks when the Sea Breeze, skippered by Powell, ran out of fuel on the way to the rendezvous point and had to be rescued by the RNLI lifeboat in Rosslare where it was inspected by Irish customs officials before returning to north Wales.

Irish Naval Service personnel boarded the Makayabella and the three crew on board were detained. They were later were questioned and charged with drug offences.

Meanwhile, NCA officers later found the motor cruiser, Sea Breeze, moored in Pwllheli marina and, although Powell had disappeared, he subsequently handed himself in to police after NCA officers raided his home in Guiseley

He pleaded guilty at Leeds Crown Court in October to conspiring to import a Class A drug into the UK and was remanded in custody for sentence on Friday.

Prosecution counsel Paul Mitchell told the court that Powell told an officer at the station: “I believe you have got something of mine – £63 million worth of cocaine.”

Searches made of Powell’s home after he was arrested recovered satellite phones used to communicate with the crew of the Makayabella as they made their way across the Atlantic from the Caribbean, the court was told

Defence counsel Adrian Pollard said his client had pleaded guilty, thus saving the state the expense of a trial. “He took a gamble. He was approached, he involved himself, the risk was a significant one, it has not paid off,” said Mr Pollard.

After sentencing, NCA branch commander David Norris said: “This single seizure roughly equates to 4 per cent of the total amount of cocaine we estimate is imported into the UK every year.”