Minister for Foreign Affairs Charlie Flanagan has said that Northern Ireland is now 'much closer' to a snap election following the resignation of Deputy First Minister Martin McGuinness. Video: Reuters 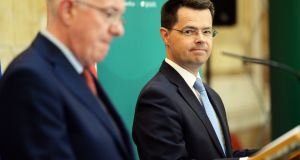 Minister for Foreign Affairs Charlie Flanagan and Secretary of State for Northern Ireland James Brokenshire are not optimistic of a resolution to the Stormont crisis. Photograph: Eric Luke

Sinn Féin has rebuffed efforts by the British and Irish governments to devise a compromise that would prevent the collapse of the Stormont institutions and avoid Assembly elections.

Despite an intervention by Taoiseach Enda Kenny and talks held at Stormont by Minister for Foreign Affairs Charlie Flanagan and Northern Secretary James Brokenshire, Sinn Féin remains insistent that Assembly elections must be held.

On Wednesday, Mr Kenny met Sinn Féin president Gerry Adams in Dublin and spoke to DUP leader Arlene Foster and former deputy first minister Martin McGuinness by telephone to see if a way could be found out of the crisis.

Through Wednesday and Thursday Mr Brokenshire engaged in talks with the Northern parties while on Thursday Mr Flanagan travelled to Stormont to hold separate discussions with Ms Foster and Mr McGuinness.

After those talks, Sinn Féin did not deviate from its position that it will not nominate anyone to replace Mr McGuinness, who resigned as deputy first minister on Monday over Ms Foster’s handling of the “cash for ash” controversy.

Minister for Health Michelle O’Neill, who was part of the Sinn Féin talks delegation that met Mr Flanagan and Mr Brokenshire, said elections were vital following the Renewable Heat Incentive (RHI) debacle that could cost the Northern taxpayer up to £490 million.

“Martin made his position very clear when he placed his resignation in the Assembly on Monday. We now need to move to an election,” she said.

“We now believe, on the back of this latest scandal of RHI, and a whole litany of issues in relation to equality, that it is now over to the public to have their say and to place their vote,” added Ms O’Neill.

The deadline for Sinn Féin nominating a replacement for Mr McGuinness is 5pm on Monday. Mr Flanagan said he was available to try to facilitate any moves that might yet stave off elections and the dissolution of the Northern Executive and Assembly. But he appeared reconciled to Sinn Féin maintaining its current position.

“I said on Monday that an election was likely. I can say now as we move towards the end of the week that that scenario seems even more likely,” he said.

Earlier on Thursday, the DUP Minister for Communities Paul Givan reversed his pre-Christmas decision to withdraw a £50,000 grant to promote the Irish language promotion – a move Sinn Féin had cited as being influential in Mr McGuinness’s resignation.

Asked had this raised hopes of a possible softening of attitudes, Mr Flanagan replied: “While the gesture is somewhat welcome, a lot more will be required, it seems. If parties are not meeting and not engaged in dialogue, it makes it difficult.”

Mr Brokenshire was equally pessimistic about the chances of an 11th hour resolution of the crisis. “The reality remains, the high probability remains, that we are heading towards an election,” he said.