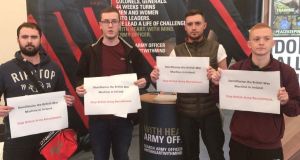 Tam Donlon, of the party’s Northern executive, said that universities “should not be used to recruit young people for imperialist conflicts.

“Universities should be places of learning where young people and others can expand their horizons and opportunities,” he said.

“In Ireland we know all too well the brutality of the British army and the pain and misery their actions have caused to so many families.

“I am calling on students to reject the British army’s attempts to sign up new recruits at university campuses,” added Mr Donlon.

A Sinn Féin spokesman said such protests were in accord with the party’s “opposition to the British army being in Ireland”.