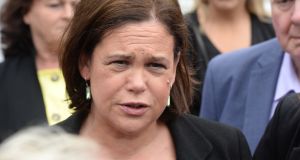 Sinn Féin leader Mary Lou McDonald: came in for general criticism for a number of incidents in the past year. Photograph: Dara Mac Dónaill

A Sinn Féin review into its poor performance in the local and European elections has found the party needs to significantly improve how it communicates with the public.

However, it strongly argued that the party’s policies and political positions do not need to change.

The review does not single out or criticise the performance of any individuals, including party president Mary Lou McDonald.

Ms McDonald, a TD for Dublin Central, came in for some criticism for a number of incidents in the past year, including being photographed posing behind a banner which said “England: Get out of Ireland” at the St Patrick’s Day Parade in New York.

It is understood the review has recommended a revamp of the party structures to focus its organisational efforts on the forthcoming general election.

Two review panels of three members each were established by the ard chomhairle, the party’s governing authority, to compile submissions from across the party on both elections.

The submissions came from members, cumain and cuigí – regional structures based on the European Parliament constituencies – to the ard chomhairle.

Reports from the two review panels were considered by the ard chomhairle at a meeting last Saturday. The European elections saw Sinn Féin drop from holding three seats in the Republic to just one, with Midlands North West MEP Matt Carthy its sole MEP south of the Border.

The local elections saw Sinn Féin drop from a council seat haul of 159 in 2014 to just 81 this time out.

Party sources said between “10 and 20” recommendations arising from the elections have now been sent to the Sinn Féin officer board – which includes officials such as party treasurers, secretaries and others, as well as elected representatives such as Ms McDonald and vice-president Michelle O’Neill.

The recommendations are understood to include changes to how the party gets its message out via its own press office, social media channels and website, with one figure saying it has “slipped” in its social media output.

“Is our message getting through?” asked one source, adding that a focus would now come on how the party improves the communication of its own policy solutions and proposal. This would come in addition to the usual critique of government policy.

Organisational changes mentioned include reallocating some staff to areas that will help prepare for a general election, such as improving regional structures. The party press office and communications arm is also earmarked for change and improvement.

Garda chief lauds courage of officers at anti-lockdown protest 22:01
Biden ‘unequivocal’ about Belfast Agreement support as Dublin and London row over NI protocol 21:47
More than 40% of those on probation had mental health diagnosis, report shows 21:46
Sharp Dáil exchanges during debate on land agency Bill 21:22
Leaving Cert pupils to get six days to select between exams or accredited grades 21:09