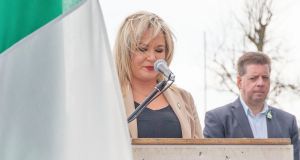 Sinn Féin leader Mary Lou McDonald has said it was time for dissident republicans “to pack up” and end their campaign of violence.

Speaking at an Easter Rising commemoration in Belfast on Sunday, Ms McDonald also said that in the continued absence of a powersharing administration, a British-Irish joint authority was required.

She again offered her sympathy to the relatives and friends of Lyra McKee, who the New IRA has been blamed for killing in Derry last Thursday, and told the dissidents there was “no cause progressed by armed actions”.

On the issue of violence, Ms McDonald said “the sacrifices of our patriots do not need to be repeated”.

Speaking in Derry at the annual Easter commemoration in the City Cemetery, the party’s Northern leader, Michelle O’Neill, called on dissident republicans to disband and end their “futile actions” following the murder of Ms McKee.

“Sadly, what we have here is a small number of people caught in a time warp who have self-appointed themselves to carry out actions which are pointless, anti-peace, anti-community and, frankly, antiquated,” said Ms O’Neill.

She described the killing of Ms McKee as brutal and said: “The people who brought guns on to the street, and those who organised them, do not represent any version of Irish republicanism.

“They have no politics, no strategy and no popular support amongst the vast number of ordinary people from this city, or anywhere else in the country.

“Their actions are a barrier to Irish unity...They are living in a fool’s paradise.”

“So it is past time for these groups that masquerade as republicans to pack up, to cease their activities and let the people get on with building the Ireland we all want – an Ireland that will be a tribute for our patriot dead and for all those who died. The Ireland in which Lyra McKee should have lived.”

Ms McDonald also called for the implementation of joint authority over Northern Ireland by the British and Irish governments.

“Last year we reached agreement with the DUP leadership to re-establish powersharing but they walked away and in so doing they refused to honour the agreements and work in genuine powersharing,” she said.

She accused the British government of threatening a return to direct rule from Westminster. Such a move would be an “effective binning” of the 1998 Belfast Agreement and its powersharing institutions.

“This cannot and must not happen,” she said. “So if the DUP is not up for genuine powersharing, delivery of rights and equality, then the Irish Government must act.”