Public has until September 25th to make submissions or objections 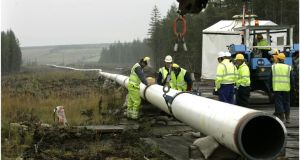 Shell E&P Ireland has urged the Department of Energy to ensure “prompt processing” of its application to operate the Corrib gas pipeline, as it says that “all of the elements of the Corrib gas field are in an advanced state of readiness”.

The company has submitted an application to the department for permission to operate the 91 kilometre-long high pressure pipeline in north Mayo under section 40 of the Gas Acts. Details of the application were not available on the department’s website on Wednesday.

Consent for the pipeline’s construction was granted by acting energy minister Pat Carey on the day of the last general election in 2011, after a route for the final section under Sruwaddaccon estuary was approved by An Bord Pleanála.

Legal actions brought by An Taisce and others over the manner in which consents were granted were settled and withdrawn at the High Court in October 2011.

An Taisce said in a statement afterwards the manner in which the project was consented to and constructed was “a travesty” of European environmental law and its action was about “breaking bad precedents”.

The latest application is one of the last consents required by the Corrib gas developers, and the public has until September 25th to make submissions or objections.

The developers are still awaiting a final determination by the Environmental Protection Agency (EPA) on a revised emissions licence for the project.

The EPA recommended a revised licence in April of this year in a preliminary decision which attracted eight objections - including one from Shell. The company was not happy with aspects of nine conditions.

The EPA turned down requests made by over 1,160 people for an oral hearing into the revised license application.

Shell had received its original EPA licence in 2007, but sought a review after it agreed to a demand by Erris fishermen that “treated produced water” from the refinery be discharged out at the well head, rather than some 12 km offshore.