Shell to Sea goes to UN over policing of gas dispute 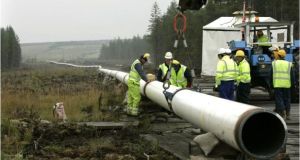 Shell to Sea has appealed to the UN High Commissioner for Human Rights (OHCHR) to raise the issue of policing the Corrib gas dispute with the Government.

The Mayo-based environmental group says it has made the submission to the OHCHR’s office, following Minister for Justice Alan Shatter’s confirmation in the Dáil yesterday that he did “not see a necessity” for an independent inquiry into policing in North Mayo.

UN Special Rapporteur on Human Rights Defenders Margaret Sekaggya had recommended that the Government should “investigate all allegations and reports of intimidation, harassment and surveillance in the context of the Corrib gas dispute in a prompt and impartial manner”.

In a report submitted to the UN Human Rights Council early last year, Ms Sekaggya also advised that the Government permit the Garda Ombudsman to conduct an “examination of the practices, policies and procedures of the police in the context of the Corrib gas dispute” ,and enact “overarching legislation to protect whistle-blowers in all sectors of activity, ensuring that it complies fully with the United Nations Convention against Corruption”.

Her recommendations relating to the Corrib gas project were echoed in March of this year by South African archbishop Desmond Tutu and former UN assistant secretary-general Denis Halliday, along with a number of signatories to an appeal tabled by peace and justice group Afri.

The Front Line Defenders human rights organisation also said that policing of the Corrib gas dispute should be included in “any Government inquiry” into Garda accountability.

Speaking in the Dail yesterday, Mr Shatter said it was “deeply regrettable” that “so much Garda resources have to be tied up” in the policing of protest activity in north Mayo.

Mr Shatter said that between 2011 and 2013, 38 defendants were brought before the courts for “public order offences, criminal damage and assault on gardaí”, and the total cost of policing the protests had reached over €16 million, excluding basic salaries of gardaí.

He said that the Garda Síochána Ombudsman Commission had investigated “in the region of “ 124 complaints arising from policing in this l ocation, and “in excess of “ 100 were deemed inadmissible or “not to have disclosed breaches of discipline”. Mr Shatter made no reference to a GSOC recommendation that a senior officer be disciplined arising from the handling of a protest in 2007 in which a number of people, including gardai, were injured. The Garda Commissioner has not acted upon this recommendation to date.

“Given these circumstances I do not see a necessity for an independent inquiry into the policing operation in north County Mayo,” Mr Shatter said.

In its submission to the OHCR, Shell to Sea says that “the current situation in Mayo is that each allegation of police malpractice is investigated separately either by police officers from other areas or by a wholly inadequate Ombudsman’s office, an office which successive Ministers for Justice have repeatedly restrained from conducting a full investigation of Corrib policing”.

“In the local court of justice judges issue convictions based on Garda statements that are contradicted by their own video evidence, only to be successfully appealed in higher courts months or even years later at great expense and personal cost to those involved,”it says.