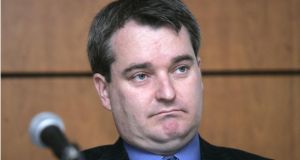 The secretary general of the Department of Public Expenditure, Robert Watt, has been accused of being “over-sensitive” after he said it was unfair to the broader public service to concentrate on mistakes, errors and waste highlighted by the Comptroller and Auditor General.

Appearing before the Dáil Public Accounts Committee yesterday, Mr Watt said waste was unacceptable, lessons should be learned, and he was happy to hear suggestions on how performance could be improved.

Improvements
However, he said it was important to acknowledge the improvements that had been made. It was a very unfair representation of the public sector and what went on in it to take a report from the comptroller with 10 or 12 chapters identifying particular issues without placing these in the context of the scale and size of the system.

Mr Watt said that no matter what there were always going to be mistakes and projects that did not work out.

While it was very important that any incident should be examined and followed up, it should also be looked at in the overall context of the spend of the organisation concerned or the amount it raised in revenue generally.

Mr Watt said his worry was that the coverage in the media of the comptroller’s reports outlined a litany of waste and abuse and indicated that the system was malfunctioning. People had confidence or lack of confidence based on how a report was reported.

This could present a distorted view of the performance of the system.

“Let us have a report alongside this report talking about all the successes, achievements, productivity gains, where money is being appropriately spent,” Mr Watt added.

Chairman of the Public Accounts Committee John McGuinness said there could also be a list of all the people on trolleys and those who could not get operations because of all the money being wasted in the system.

Debates and hearings
Fianna Fáil TD Seán Fleming said Mr Watt was being over-sensitive. The contextual issues of achievements and successes were being set out every other day of the year by ministers and departments in Oireachtas debates and committee hearings.

Meanwhile, Mr Watt said there were “discussions and disagreements” on some elements of the savings the Health Service Executive was expected to generate under the Haddington Road agreement. There were issues around the “exact quantum” that would be realised.

Achieve targets
However, he said he expected the health service would achieve the targets set under the agreement.

On Tuesday the Department of Public Expenditure issued a statement – in response to HSE comments in its most recent performance report – stating that if the health authority was reporting slippage or inability to deliver savings, it was because it and local health management were failing to deliver on the potential of both Croke Park and Haddington Road.

“The pace of reform is set by management, not by unions.”