Search to resume for missing fisherman off south west coast 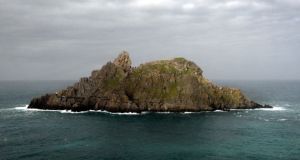 A search operation was launched after a man went overboard south west of the Blasket Islands.

A search is due to resume at first light off the south west on Thursday morning for a fisherman who fell overboard from a trawler which left Castletownbere in West Cork early on Wednesday.

The 46-year-old Spaniard was aboard the 38 metre Spanish trawler, Peixemar Dos, which was fishing out of Vigo in north western Spain but which is currently operating from Castletownbere.

The Irish Coastguard Marine Rescue Centre at Valentia received a report of the man going overboard about 64km off the Blasket Islands around 6.30pm Wednesday evening and a search was launched.

The Valentia RNLI Lifeboat, John and Margaret Doig, was launched and proceeded to the scene while the Irish Coastguard Sikorski helicopter, Rescue 115, from Shannon was also tasked to assist.

Rescue 115 arrived on scene around 7.55pm but visibility was poor and the helicopter returned to base at Shannon while the Valentia lifeboat remained on scene until 11pm last night.

The LE Aisling was also en route to the scene which is south west of the Blaskets and was expected to arrive at around 4am Thursday morning to take over co-ordination of the search.