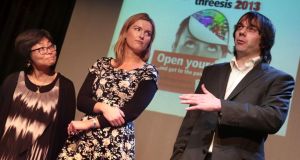 Overall winner James Curry, a PhD history student,answers a question from the audience at the THREESIS competition final at An Taibhdhearc Theatre in Galway. Looking on are finalists Dr Su-Ming Khoo, a lecturer in the School of Political Science and Sociology, NUIG, and Joanne Kennedy, a PhD student. Photograph: Joe O’Shaughnessy/The Irish Times.

Who won the newspaper cartoon war in 1913? What are “orphaned” public goods? These and other compelling questions were the focus of an unusual contest for academics in a Galway theatre this week.

Longer than a tweet and shorter than a Ted talk, “Threesis” challenges staff, researchers and students at NUI Galway (NUIG) to pitch their research in language that will woo a general audience.

Three large Christmas hampers were the lure for this year’s finalists, who had to distil their life’s work into a three-minute talk with three accompanying slides to a panel of three judges.

The eight, selected from two heats, reflected a broad range of disciplines from informatics to humanities to social science/public policy and biomedical science and engineering, as master of ceremonies Sarah Knight of NUIG’s Ryan Institute explained.

Why should a scientist need six days to load information on to a database, due to a variety of file formats, when he or she could take just two hours to “start doing something useful with data”, Arias asked.

Then came James Curry, also a PhD student at the Moore Institute, whose thesis focuses on the visual imagery of the early 20th century.

During the 1913 Lockout, the Irish Transport and General Workers’ Union (ITGWU) newspaper the Irish Worker employed the cartoon skills of Ernest Kavanagh, a union clerk and friend of Jim Larkin’s, to have a regular dig at policemen, businessmen and the notorious William Martin Murphy, he said. However, Dublin artist WJ Miller was employed to attack Larkin in one of two anti-Larkinite newspapers, the Liberator, with great effect.

Another publication, the Toiler, ran a photographic campaign that speculated, among other things, that Larkin was the son of an infamous Fenian.

Joanne Kenney, whose PhD focuses on the progression, if any, of brain abnormalities and cognitive changes over time in “first episode” psychosis, had studied the mental skills of a group of people who had experienced a psychotic episode in 2009.

A follow-up examination in four years later found these mental skills had not deteriorated.

“Rethinking public goods and public values” was the title of a rapid presentation by social scientist Dr Su-ming Khoo, who suggested the current understanding of public goods – as in climate stability, biodiversity and resource protection, collective peace and public health – was based on an outdated economic theory of market failure, necessitating state action.

Mental shortcuts
The next finalist, management lecturer Maureen Maloney, focused on the “mental shortcuts” we take in making decisions about providing for old age.

Eunan McBrearty, the only undergraduate finalist, described his work on a scientific outreach session for primary school pupils.

By introducing different researchers to the pupils, he was able to demonstrate that scientists were “normal people just like them” and that “any of them can be a scientist too”.

Sara Vero, whose PhD research with Teagasc involves studying the transport of pollutants in groundwater, described a centrifuge method she had found to help her work.

She got a runner-up placing, as did Ms Kenney.

The winner was Mr Curry, who clutched his hamper with relief, declaring that he now had “a Christmas present for my mother”.