Family named after the bodies of man, woman and their three sons found in a house 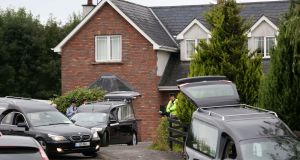 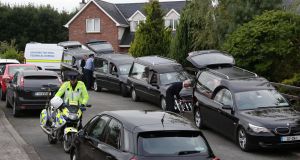 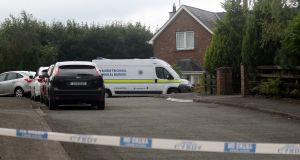 Gardaí at the house where five members of the same family were found dead on Monday morning. 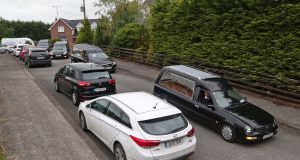 Four hearses containing the bodies of the five victims leave the scene at Oakdene Barcroney, Ballyjamesduff, Co Cavan where the bodies of a family of five were found this morning. Photograph: Colin Keegan/Collins Dublin

The bodies of five members of the same family have been found at a house in Ballyjamesduff, Co Cavan.

“We believe all the answers are within that house,” he said.

“The mostly likely scenario is one person may have caused the death of the others. All circumstances will be explored but as it stands that is the position.”

The bodies were found at a house in Oakdene, Barconey on Monday morning.

Mr O’Driscoll said three of the bodies were found in bedrooms upstairs and two downstairs.

He said there was no evidence a gun was used.

“A number of objects that were found in the house will be subject to detailed examination but until that examination is complete we are not in a position to say the exact cause of death,” Mr O’Driscoll said. Castlerahan National School, where the father was a teacher, issued a statement from principal Anne Foley on Monday evening.

The father has been named as Alan Hawe, his sons as Niall and Ryan, who were pupils in the school, and Liam (13) who was a past pupil. Their mother Clodagh Hawe worked as a teacher in a different school.

“They were wonderful children who will be greatly missed by all who knew them,” Ms Foley said.

“Alan was a valued member of our school staff and community.”

Ms Foley said psychologists from the National Educational Psychological Service (NEPS) had visited the school, and were supporting and advising our teachers in their efforts to help the students in dealing with the tragic event.

Oristown National School principal Ann O’Kelly Lynch said the school was “deeply saddened” to hear of the death of their colleague Clodagh Hawe.

“ This is a terrible tragedy for the families, schools and the communities involved,” she said.

“We are deeply saddened by this event. Our sympathies and thoughts are with Clodagh’s family and friends.

“Clodagh was a much loved and valued teacher in our school and will be greatly missed by all who knew her.”

She said the school had also brought in psychologists from the NEPS to provide support.

Gardaí said an investigation is ongoing but at this stage they are not looking for anyone else in relation to the deaths.

It is understood the bodies were found after a relative raised the alarm.

The area has been sealed off and the State Pathologist and the Garda Technical Bureau have been alerted.

According to local sources the family were seen in the community on Sunday “in high spirits”.

Locals also expressed shock and disbelief at the tragedy.