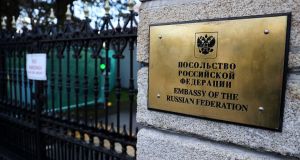 Russian embassy in Dublin: the two Russian aircraft were carrying out a “routine training mission” in the North Atlantic. Photograph: Brian Lawless/PA

Russia will continue to “probe” the “incredibly strategically important waters west of Ireland” with long-range air surveillance and nuclear submarines, a former US Nato commander has said.

Retired US navy admiral James Stavridis, who was Nato’s supreme allied commander in Europe from 2009 to 2013, was responding to incidents of two Russian bomber aircrafts flying in Irish-controlled airspace west of the country twice over the past week.

On Wednesday, British RAF “Typhoon” fighter jets were scrambled for the second time in five days to monitor two Russian Tupolev TU-95 “Bear” bombers as they flew in international airspace controlled by the Irish Aviation Authority.

Adm Stavridis said that the Russians were testing a strategically important area called the Greenland-Iceland-UK “gap” that controls the entrances to the North Atlantic and transatlantic commerce between the US and Europe, the largest trading relationship in the world.

“This is attractive to Vladimir Putin because it demonstrates Russian military capability, creates some divisive forces in Nato because there is a difference of opinion as to how robustly to respond and provides an image within Russia of a strong decisive leader,” the former US commander in Europe told The Irish Times.

Adm Stravridis referred to the significant timing of the military flights as the Russian leader seeks to extend his term of control to 2036 with recent proposed constitutional changes in Moscow.

The Russian embassy in Dublin said that the two Russian airforce aircraft were carrying out a “routine training mission” in the North Atlantic.

“The flight took place in the international airspace according to all international rules and standards,” said Russian embassy spokeswoman Victoria Loginova. “The aircraft at no point entered the sovereign airspace of Ireland, nor was there any plan to do it.”

Adm Stavridis said that building “a sophisticated jet force” in Ireland to conduct intercepts of Russian aircraft would be “extremely expensive”.

He noted that the 16 fighter jets that former Irish air corps head Maj General Ralph James recently suggested would be required for a full air defence capability would be “an absolute minimum” that was required.

“For true independence of operation, it would require additionally a more sophisticated radar and electronic sensing system directed west,” he said.

He suggested a better solution would be to introduce a “defined air defence cooperative arrangement with the UK/Nato while also appealing to the European Union military forces”.

Ireland could offer to host EU or Nato jets for “quick response” perhaps from France or Germany in a similar arrangement followed by the Baltic states, he said.

Russia’s spokeswoman at the country’s embassy in Dublin said that Moscow has been flying these kinds of missions for many decades.

“It has never been a problem for anyone except maybe for the British political and military establishment which has been exploiting for their own purposes the myth of ‘Russian threat’ throughout much of a modern history,” she added.