Rose of Tralee kicks off again: ‘Why not have it? Girls love to dress up’ 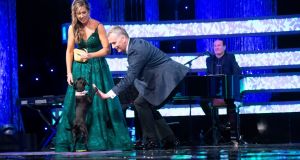 Tralee is in a particularly festive mood this week and it’s only partially down to the Roses.

For the first time the Rose of Tralee festival has coincided with All-Ireland final week.

The streets of the town are lit up like a Christmas parade as they are every year for the festival, but this time the decorations are mingled with the familiar green and gold flags on every lamppost.

Along with Rose memorabilia, the shops are doing a steady trade in bumper stickers which belie Kerry’s outsider status for Sunday’s showdown against five-in-a-row chasing Dublin: “Kerry4Sam” and “192 KY SAM”. There is even one with the slogan “Believe”, normally a superfluous sentiment when it comes to Kerry and football.

The festival is celebrating its 60th anniversary with an exhibition and fashion parade.

To its detractors, it is the Japanese knotweed of festivals - no amount of disdain will kill it off. It only develops into more durable forms.

The slimmed-down television programme has 32 contestants this year but they are only a selection of Roses in Tralee this week, with 34 previous winners turning up for the Rose Ball on Saturday.

The first Rose of Tralee, Alice O’Sullivan, recalled the fireworks that followed her selection in 1959. “This was 1950s Ireland, which was a very dull place, and suddenly there was all this light and noise. It was extraordinary. It was wonderful.”

Cathy Quinn is celebrating 50 years since she won the Rose of Tralee. She was a student nurse from Longford town when she won in 1969. The passage of the years has yielded an uncanny symmetry. She attended for the 25th anniversary and was then nursing her four-week-old daughter. Twenty-five years later that daughter is now a mother herself with a four-week-old baby.

One of her first duties as Rose of Tralee was to present a prize on behalf of Bord na gCon in Miami for which she had to get a passport having never travelled abroad before.

“I’d like to think I was a confident person before winning the Rose of Tralee, but it certainly enhanced it,” she said.

“It showed me that there was a whole new world out there. It was wonderful. My box of photographs come out every year. That was then, and that was now.”

The Rose of Tralee was not a television event in those days let alone a social media phenomenon. There was none of the heated debate then about whether the format was past its sell-by date, a debate that seems as perennial now as the festival itself.

“It’s weathered all the vicissitudes and people like it,” Quinn says. “Why not have it? Girls love to dress up. They are wonderfully intelligent, they know their own minds.”

The first group of Roses to go on stage live included Mayo Rose Nicole Loughlin who despite being just 22 successfully fundraised to start a secondary school in Malawi.

Her story is one of the most compelling of this year’s Roses. When she was a teenager she was diagnosed with Chairi Malformation and Hydrocephlasus, excessive water on the brain. Or, as she put it succinctly, “I had too big of a brain”.

She survived thanks to experimental surgery. She is becoming a living kidney donor to a stranger in Arizona.

Finally she consented to getting a tattoo, but not live on stage. The Rose of Tralee is long, but not that long.