Reasons given for temporary closure of Donegal veterinary practice disputed 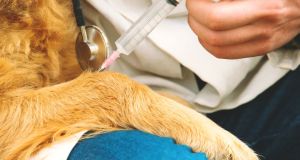 In a communication sent to staff on Friday, Independent Vetcare (IVC) had claimed it was temporarily closing the practice due to “recent difficulties” including a Department of Agriculture investigation, a lack of vets to meet the requirements of the practice, and “other legal/regulatory issues”. Photograph: iStock

A Donegal veterinarian has disputed the reasons offered by a major British investor for temporarily shutting one of the largest veterinary practices in the county.

The closure of the Donegal Animal Hospital in Letterkenny caused significant difficulties for farmers in the locality last week, who were forced to seek care at short notice for their animals elsewhere. The practice has around 1,500 farmer clients, and another 5,000 customers with small animals.

In a statement, vet Ciaran Roarty said “there is no legal, ethical or regulatory reason” why the British company, Independent Vetcare, had suspended normal duties at the Donegal Animal Hospital in the county.

In a communication sent to staff on Friday, Independent Vetcare (IVC), which controls over 900 veterinary practices around the UK and Ireland, had claimed it was temporarily closing the practice due to “recent difficulties” including a Department of Agriculture investigation, a lack of vets to meet the requirements of the practice, and “other legal/regulatory issues”.

Mr Roarty, whose family owned the facility before its sale to the British company, holds the certificate of suitability - or main regulatory clearance - for the business, and both he and his brother still practice at the facility.

When contacted about the closure last week, a spokeswoman for the company said the temporary closure of the practice was due to “staffing and other regulatory issues”. When asked about its reference to a Department of Agriculture investigation in a communication to staff, it said it had no comment. A spokesman for the Department said it had no comment.

Staff at the veterinary practice have been kept on on their current terms and conditions while IVC reviews its next steps. “The closure will give us time to solve these issues. We are working with other practices on both sides of the Border to ensure continuity of care for animals,” a spokeswoman for the company said.

The company said the temporary closure had nothing to do with the impending threat of a no-deal Brexit. A notice posted on the front of the building has cited “challenges in the practice” and referred its customers to other nearby chains.

Independent Vetcare purchased the Donegal practice from a local family of veterinarians eight months ago, it is understood. The company had been built up by the Roarty family over a period of years, purchasing other smaller operators to build itself into a major operation.

In addition to the Donegal Animal Hospital, it owns two other practices in Ireland. In Cork, it runs Sunbeam while in Dublin it runs a company called Anicare.

Corporate records filed with the UK Companies House show that the company has been on a buying spree in recent years, acquiring 229 veterinary practices during 2017.