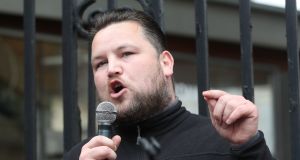 Minister for Children Roderic O’Gorman has accepted an apology from actor John Connors following his “wrong and unfair” involvement in a homophobic campaign against the Green Party politician.

Earlier this month Mr Connors, a prominent Travellers’ rights activist, had called for Mr O’Gorman’s resignation after far-right Twitter accounts had reposted a photo of him with British LGBT activist Peter Tatchell at Dublin Pride in 2018.

Mr Connors had said allegations about the newly appointed Green Party Minister and his association with Mr Tatchell should be “the political scandal of the year”.

The actor accused the Green Party of inviting Mr Tatchell to take part in Pride and highlighted the campaigner’s past efforts to lower the British age of consent to 14.

However, Mr O’Gorman said the Green Party had not invited Mr Tatchell to take part in Pride, but that he had been invited to Ireland by another group involved in the festivities.

Saying that he had met Mr Tatchell at Dublin Pride for “the first and only time”, Mr O’Gorman said he had become the victim of a “far-right social media pile-on” that used misinformation to play on child protection concerns.

Defending his conduct, Connors had initially said Mr O’Gorman was “playing the victim card and claiming homophobia” and that people were being branded as far-right for “being anti-paedophilia”.

However, in a statement posted on Twitter on Sunday night, Connors said he wanted to apologise to Mr O’Gorman for his comments that had been “so wrong and unfair on every level”.

“I allowed myself to lead and be part of an online frenzy that cast hurtful and false assertions on his character and pursued him in the most unfair way,” he declared.

Mr Connors said he had “battled bigotry my whole life and my deranged pursuit of Minister O’Gorman played a huge part in the homophobic backlash he received from the very bigots I despise”.

Saying past tragedies had taken “its toll on my mental health”, Mr Connors said this “in no way” excused his actions: “Looking back I’m sick to my stomach”.

He said his own “misguided anger led me to appear to feed an army of trolls and support groups whose views I find repugnant, whose politics are rotten and whose methods are ugly”.

“I find myself in a position where I seem to have sided with the very people whose politics I most despise. I have been politically naive. I did not fully inform myself of their views and l am truly horrified that I have in any way enabled them.”

Replying, Mr O’Gorman said on Monday that he “very much” appreciated the apology and considered the matter fully resolved. “Take care of yourself, John,” he said.