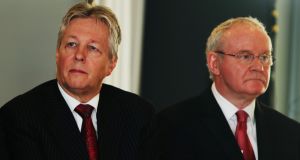 First Minister Peter Robinson has accused Martin McGuinness of speaking like a “dictator” and making “unhelpful and irrational” comments that were damaging the prospects of political progress. He said he had a “visceral hatred” of the Orange Order.

The quarrel between First Minister and Deputy First Minister flared today after Mr McGuinness said he had been informed by other unionist leaders, whom he did not name, that in Belfast the Orange Order, the UVF and its political wing, the Progressive Unionist Party were acting as “one and the same thing”.

Earlier in the week he accused the DUP and the Ulster Unionist Party of “dancing to the tune of extremists” in their refusal to endorse the Richard Haass proposals on parades, flags and the past.

It prompted Mr Robinson to respond early this (Friday) morning with a stinging and quite personal attack on his main partner in the Northern Executive - a response that may further undermine the chances of getting agreement on the Haass proposals.

“The unhelpful and irrational comments made by Martin McGuinness will do nothing to take the negotiations forward. He is in political denial and clearly has an exaggerated view of what his role is within the process,” said Mr Robinson.

“He speaks as if it is every other party’s requirement to move to his position - and if they do not then he considers it to be a lack of leadership on their part. He speaks as if he is not one of the parties but rather the controller and dictator of how the process will operate. He appears to believe it is everyone else’s duty to reach an agreement on his terms,” he added.

“Every party in the process has had to move in order to narrow the differences. It is his responsibility to show some leadership and work to reach agreement on outstanding issues. Again, Sinn Féin will not dictate the rules of engagement,” said Mr Robinson.

The First Minister said that Sinn Féin did “not own the process” and that it was up to the five main parties to reach consensus and if that did not happen it would be Mr McGuinness’s fault as much as the fault of unionists.

“As the largest party in Northern Ireland we will not be shepherded into any structure that restricts our ability to conclude agreement on deal imperatives. If SF or any other party does not want to be part of a process that seeks to resolve outstanding issues they can walk away but that will display a lack of leadership on their part,” he added.

Mr Robinson accused Mr McGuinness of displaying a “visceral hatred” of the Orange Order in an interview the Deputy First Minister gave to the BBC’s The View programme on Thursday night. This was where Mr McGuinness said the Order, the UVF and PUP were “one and the same thing” - a claim the Order said was “entirely without substance”.

Mr Robinson defended senior Orange Order member, the Rev Mervyn Gibson whom the DUP invited to be part of its three member negotiating team during the Haass talks.

“I defy Martin McGuinness to deny that Mervyn Gibson’s contribution was anything other than instructive and positive,” he said.

“The Orange has not attempted in any way to impose its will on the process and has most recently issued an encouraging and positive statement expressing its willingness to be helpful,” said Mr Robinson.

“Let’s have less of the mind games outside the process and more serious engagement within it,” he added.