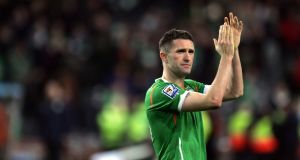 Robbie Keane has been named International Person of the Year at this year’s People of the Year Awards in recognition of his “inspirational service, leadership and passion” over the course of his 18-year international football career.

Davitt Walsh, who saved a baby from drowning in the Buncrana tragedy earlier this year, was also honoured as were Olympic medallists Paul and Gary O’Donovan and Annalise Murphy.

“I have always worn the green jersey with pride and I will always be grateful for the opportunities to play for and captain the international team,” Keane said. “It has been the highlight of my career. It is a privilege for me and my family to receive this award.”

Davitt Walsh received an award for his actions during the Buncrana pier tragedy in March.

He was just about to leave the beach area when he noticed a car sinking in the water. He jumped into the water and raced to the aid of the occupants. When he reached the vehicle, Seán McGrotty told him to save his four-month-old daughter Rioghnach-Ann McGrotty.

Seconds later the car was under water and Rioghnach had lost her father Seán, her brothers Mark (12) and Evan (8), her grandmother Ruth Daniels (57) and her aunt Jodie-Lee (14).

“The only time I feared for my safety was on my way back from the car because I thought I wasn’t going to make it back to shore. I was physically exhausted, I was struggling and I actually feared for the baby’s life more than my own. I really wanted to get her back to shore,” Mr Walsh said.

Alan Herdman (24) received a Young Person of the Year Award for saving the lives of eight young children who nearly drowned in Rusheen Bay in Galway in July.

The water sport enthusiast and rescuer was bringing a group of youngsters to the bay when a dog walker alerted him to other children in difficulty. He rushed into the water to come to their aid and the ceremony heard his “courage, bravery and endeavours avoided the ultimate tragedy”.

The O’Donovan brothers and Murphy were joint winners of the Sports Person of the Year Award with all three having secured silver medals in the Rio Olympics.

In their first games, the O’Donovan brothers won silver in the men’s lightweight double scull. “We’re really honoured to accept this award and follow so many previous recipients who have inspired us to chase our own dreams,” Gary O’Donovan said.

Annalise Murphy navigated her way in stunning style to Ireland’s first sailing medal in over 35 years. “It really means a lot to win this award,” she said. “It’s great for all the young sailors in the country to realise they can make it if they keep pursuing their dreams.”

Amen, a charity supporting male victims of domestic abuse, was named as the Community Group of the Year.

John Muldoon and Pat Lam received a Person of the Year Award after leading Connacht Rugby to their first trophy in 131 years in a truly historic sporting moment.

Róisín and Mark Molloy were honoured for their campaign in highlighting the inadequate standards of maternity services and Milo McCarthy (11) received a Young Person of the Year Award after he raised nearly €18,000 for Syrian refugees by busking on the streets of Cork City and his hometown of Midleton.

Ireland’s Paralympic medallists won for their success in the Rio Olympics, at which they won 11 medals – four gold, four silver and three bronze.

“These awards give us the opportunity to acknowledge our heroes from communities across the country and from abroad, whose stories and achievements inspire everyone around them,” said Mo Flynn, the chief executive of the Rehab Group adding that the awards “reflect all that is good about our society”.