River kayaker dies after being swept away 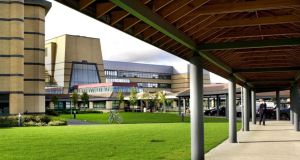 Tallaght Hospital where the man was taken. Photograph: Matt Kavanagh

A kayaker was killed yesterday when he was swept away in heavy river water swelled by intensive rainfall.

The incident occurred on the River Inchavore near Lough Dan yesterday afternoon where the unnamed man had been with about six other kayakers.

It is understood the severe weather played a contributing role in his death, the rain swelling the river and causing its speed to increase.

The man was swept away and was later recovered in an unconscious state when efforts were made to resuscitate him.

After the alarm was raised, the coastguard dispatched a helicopter to the area and took the man and two others, not thought to be injured, to Tallaght Hospital.

The Inchavore is a popular spot for kayaking.

A description of the river notes the pace and volume of water increasing in parts, an aspect that would have been aggravated by yesterday’s weather.