Revealed: The top 10 streets in Dublin for clamping

Drivers most likely to be caught out on Mespil Road, Waterloo Road, Gardiner Street 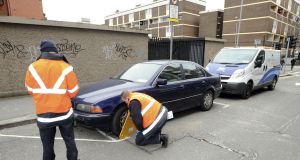 More than 56,000 vehicles were clamped on public roads in the Dublin City Council area last year, an average of 153 a day, bringing in more than €4.2 million for the local authority.

Mespil Road in Dublin 2 was the street where a vehicle was most likely to be clamped, with release fees, at €80 per case, raising €74,160 for the council, figures obtained by The Irish Times under the Freedom of Information Act show.

The figures do not take into account clamping on private lands, where release fees are usually in the order of €125.

A spokeswoman for Dublin City Council said the surplus from all parking related income, after operating costs, is ringfenced for traffic-related expenditure.

She added that the revenue generated by clamps in the city was spent on things such as “speed ramps”, “yellow junction boxes” and “disabled bays”.

The council was was unable to provide information relating to the number of vehicles clamped for being parked in the wrong colour designated zone. There are green, yellow or red zones in the city, which are indicated on the top of street parking signs. If a driver pays to park in a red zone but accidentally parks in a green or yellow zone, then they will be clamped.

The council said offences of this type were recorded as “pay and display offences” for which there were 30,444 enforcements last year.

William Keilthy, the parking appeals officer for Dublin City Council, has previously argued for an increase to €130 in the clamp release fee, which has stood at €80 since its introduction in 1998, or even €160 for persistent offenders. He last year revealed that two Dublin motorists had incurred costs totalling almost €9,000 after being clamped 54 times each in the previous four years.

However, a number of city councillors have called for a review of Dublin’s clamping system, which they claimed was “unreasonable” and “unfair” towards the city’s motorists.

Labour Party councillor Dermot Lacey said he would have originally been in favour of clamping but now believes the system has become punitive.

“If you look at Mespil Road, for example; Dublin City Council recently had to change the signage in this area, as it was unclear for motorists that it was a clamping zone,” he said.

“I do accept that clamping has to be a control of traffic in the city centre, but I think when you see cars being clamped on half empty streets then this is most definitely an issue.”