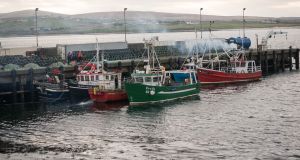 While debris from Irish Coast Guard helicopter Rescue 116 is still being washed up by the Atlantic, the search for its two missing airmen will continue, according to a senior garda.

“We still have work to do – there is no scaling back,” Supt Tony Healy of Belmullet Garda pledged, the day after an extensive surface sweep from Mayo to Donegal in search of winch team Paul Ormsby (53) and Ciarán Smith (38).

Over 8,500sq km or over 3,300sq m of sea was scanned at the weekend by some 110 fishing vessels, along with RNLI lifeboats, Irish Coast Guard, Garda and Irish Underwater Council rigid inflatable boats.

On Sunday, mountain rescue teams drawn from as far north as the Mournes in Co Down combed the shoreline at low tide, while the Garda Water Unit was at sea.

Supt Healy said small pieces of debris from the Sikorsky S-92 had been found over the weekend in several areas including Cross beach on the Mullet peninsula.

Supt Healy said the ROV had 72 more hours of work to do in “areas of interest”.

It has been almost four weeks since both men went missing after their Irish Coast Guard Dublin-based Rescue 116 helicopter crashed off Blackrock island, 13km west, during an approach to Blacksod lighthouse for refuelling.

Orla and Seán Smith, siblings of missing north Dublin winchman Ciarán Smith, set out with the Ballyglass inshore fleet on board fisherman Pearse O’Donnell’s the Éire Óg early on Saturday – a week after Ms Smith had appealed to the fishing industry for help.

“To come here, to know so many fishermen are involved in this endeavour, to hear the boats on the VHF radio and see them all around us on the radar is very heartening,” Ms Smith said afterwards at the RNLI Ballyglass lifeboat station.

“They feel this as much as we do . . . and they understand our need to find these two men. And there can be nobody at sea now who doesn’t know that they are missing.

“We may not have found Ciarán and Paul yet, but to cover that amount of sea in such a short space of time ticks a massive box for us.”

Ballyglass and Achill lifeboats have launched constantly for the past four weeks, and at this stage “every buoy, every potential area” has been checked and rechecked, the Ballyglass crew said.

The Ballyglass inshore, Sligo and Bundoran vessels, and Arranmore’s all-weather lifeboat also launched at the weekend.

“We did 150 square miles today and the big pelagic boats from Killybegs were working 20 miles to the west of us,” Mr Walsh said.

“We tend to know where to look when fishing gear goes missing. So if anything was floating today, we would have found it.”

Participants in Saturday’s sea search came from all compass points, including a contingent from Carrick-on-Suir River Rescue in Co Tipperary. Caitlín Uí Aodha, chairwoman of the Lost at Sea Tragedies group, also travelled to north Mayo.

The Irish Coast Guard has appealed to vessels at sea to continue to keep a good lookout for any material which may be associated with Rescue 116, and report any finds to Malin Head Coast Guard MRCC.

The Air Accident Investigation Unit’s preliminary report is expected to be published shortly.

It has so far confirmed that a tail section of the helicopter struck the western end of the island, and has ruled out mechanical anomalies before the crash.